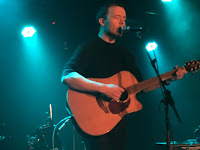 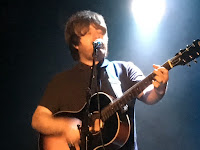 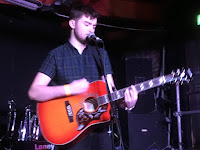 To commemorate the loss of music icon David Bowie in January, Ben Taylor of Sound Control came up with the great idea of an all-day event to commemorate the great man's work as well as to raise funds for Christies with Manchester bands and solo artists taking on the task of covering his songs and putting their own spin on them. As we had other gig commitments later, we only caught the afternoon session, but managed to see Sam Carson of Lunar, a welcome return for Danny Mahon and a four-song set from The Slow Readers Club.

Sound Control To Major Tom saw the venue packed to the rafters with Bowie fans old and young, a true reflection of the man's cross-generational impact. The middle bar was full of people dancing and singing along to a constant diet of Bowie classics and related songs, faces painted, dressed up in various guises from across his chameleon like existence. I don't think I can recall the death of any musician in my time that has had such a wide-ranging and all-encompassing impact.

On the top and basement floors there's a full set of musicians wanting to pay tribute. The first we catch is Sam Carson of up-and-coming Manchester band Lunar. He plays a couple of Bowie's best known tracks Modern Love and Starman, both recorded before he was born. What he does do is put his own spin on them, making Modern Love sound just that, speeded up a little whilst Starman reveals just how much his voice has strengthened in the short time Lunar have been together. He finishes with one of his own songs Showboater, surely destined to be a future single for his band. It's a memorable ear worm with a chorus that has that feeling that it'll lodge itself in your head and generate ecstatic singalongs as the band's star rises.

Next on in the loft is Danny Mahon and it's been a while since we've seen him play in Manchester. He doesn't play any Bowie songs, which strikes us at first as a bit odd, but then we realise that the event is here to support Christies as well as celebrating Bowie and everyone in Manchester knows someone or of someone who has benefited from the amazing work that they do. He plays three songs including opening with Four Walls and an extended instrumental intro that suggests he's keen to spread his wings and not just rely on the short snappy tracks that made him his name and he concludes with the fabulous Eric The King, one of the finest love songs to come out of the city. It's great to see Danny back playing gigs as there's no one quite taken up his mantle of telling tales of real life in suburban Manchester.

The Slow Readers Club are stripped down to Aaron and Kurt today and it's the first time in ages we've seen Aaron pick up a guitar. They're not a band to play covers - we don't recall any in the time we've followed them - so this is a new experience for them. They don't go for the obvious Bowie songs to start off with - opening with Sorrow off Pin Ups where they make great use of both their voices counteracting each other at points and working together at others and then moving on to God Knows I'm Good off his self-titled 1969 album that became known as Space Oddity which Aaron plays solo. They follow those with their own song Block Out The Sun, which works wonderfully shorn of the loud guitars and thumping drum beats of the original, testament to the endearing quality of their songwriting. They save the best for last though - a simply stunning, yet simple cover of Life On Mars. Even they are taken aback by the audience's response as they reach its conclusion.

We were disappointed not to be able to stay longer and catch some of the other diverse acts on the bill, but the event has raised several thousand pounds for Christies, testament to the good music can do and the tight knit Manchester music community. Just watching the crowd in the middle bar joined as one in song says everything that was needed to be said about a man who we will never see the likes of again in a music business rife with conformity, short commercial life spans and a quashing of genuine individuality.