Blossoms - At Most A Kiss EP 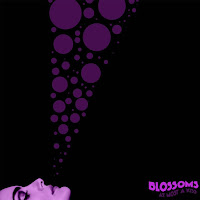 At Most A Kiss is the latest step in Blossoms' unstoppable march to the highest echelons of the charts and the biggest halls of the country. Led by a radio-friendly once heard never forgotten hook-laden title track, it's the three tracks - Fourteen, Wretched Face and Misery - that make up the rest of the EP that will delight those who have championed them for so long. Not since The Smiths have we seen a British band so prolific in their output and unerringly consistent in the quality of it.

This is an EP that confirms Blossoms' place at the very top of the pile of young British talent. Whilst the lead track has seen them slip effortlessly into the A lists of radio schedules, the other tracks continue the fine tradition of North West bands to often place their best and most diverse material hidden away on the flip sides of singles. Before they've even released their debut album, there's at least another album's worth of songs that most bands would kill for and we wait with impatient expectation to see just what they've kept up their sleeve for the album that's due in the summer.

Unless you've been living on the moon you'll have already heard the glam-rock stomp of the lead track blasting from your radio with Blossoms once again managing to blend their influences into something thoroughly unique and modern which appeals as much to teenagers as it does to those of us who've been waiting patiently for years for a new band to get truly excited about.

The other tracks, to call them b-sides would simply not do them justice, are, if anything, better than the lead track. For a band that's released nineteen songs now in just over twelve months you'd forgive them an average one, or even a duff one, but they show absolutely no signs of producing either. Fourteen has a keyboard line running through it that sends shivers down your spine each time it kicks back in and backing vocal harmonies that fit it to perfection whilst Wretched Fate is one of the best things they've ever done. It's unashamedly big and bold in the tradition of their singles, but whilst it has Blossoms DNA all over it, it sounds familiar yet like nothing they've done before. Instruments drop in and out and then come back in, guitars and keyboards usher each other in; there's so much going on in the song yet it never feels cluttered or overcooked.

As has become the norm for their EPs, At Most A Kiss concludes with a slower track that proves Blossoms have far more strings to their bow than just great three minute pop singles. Misery starts with a beautiful piano introduction, is drenched in strings and sees a softer side to Tom's voice and the others providing subtle lifting backing vocals at just the right moments . Every bit as stunning as Evelyn and Stormy from the previous two EPs, it's two minutes and four seconds that is guaranteed to have you claiming to have something in your eye.

At Most A Kiss is out on Friday. Pre-orders from iTunes come with an immediate download of the title track.