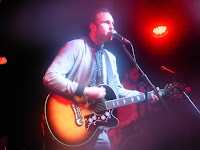 This is Billy Bibby And The Wry Smiles' debut Manchester show and it's a packed Night And Day Cafe that greets them for the launch gig of their debut EP Bide Your Time. Already Billy and his band have a set of ten songs that immediately grab you and don't let go until they've charmed their way into your heart.

Half way through the set, Billy says he's going to delve into the past for a bit, but that after that he'll be looking forward. His band mates sit down whilst he plays an acoustic performance of his former band Catfish And The Bottlemen's Pacifier. The fact that it, great song that it is, doesn't particularly stand out is testament to the quality of the songs around it, each of them imbued with that big bold vision that they had, but very much Billy's now, less rock, more melodic and at its most alluring when guitarist Rob and bassist Matt step up the mic and join in some delicious three part harmonies.

There's a great variety in the set as well, some fuller in your face rock songs such as Waitin' For You and Soundcloud reveal Hideaway, but there's many dimensions to the sound, often venturing off into an Americana sound via the North Wales coast from which they come. For a band so early in their development, this being the start of the first headline tour, they're incredibly tight and fluid and there's an intuitive bond there already and they look like they're having a world of fun up there too, something that many bands forget. 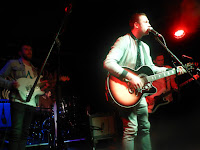 As you'd expect from it being an EP launch gig, all four tracks from it are present and correct. The stand out track of the night is the EP's lead track Don't Fall is the evening's penultimate track and sees the band let loose a little. It's clear that Billy is an accomplished songwriter and his demeanour and smile between songs tell us that he's enjoying this despite baking under the lights up on stage and a noisy crowd. As the final track God Save Her Soul, a very early Catfish song before they were on most people's radar that Billy sang lead on, reaches its breakdown and the audience join in clapping along, you can see that his vision is to take this to bigger stages than this and he's already got the songs and the band to get him there.

The Bide Your Time EP will be available at the shows.

Email ThisBlogThis!Share to TwitterShare to FacebookShare to Pinterest
Labels: Billy Bibby And The Wry Smiles