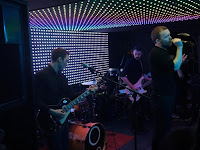 The Slow Readers Club opened 2016 with a low-key show supporting The Winachi Tribe at one of Manchester's newest venues The Live Room. An eleven-song set was pulled mainly from their breakthrough second album Cavalcade as well as selected highlights from their debut and they left the room singing along to their big anthemic songs and baying for more.

Having sold out Gorilla at the back end of last year this was an odd choice for their first gig of the year and it was immediately clear that a large section of the crowd had come for them, or at least had come knowing their songs, as there were requests being shouted before they'd even finished their last minute preparations, not having managed to get a sound check prior to doors opening.

This was evident in the first two songs where their usual power and thrust was lost in the mix, but that was resolved quickly and a swap over of microphones between front man Aaron and guitarist Kurt provoked some friendly banter between the brothers and allowed us to hear Aaron properly. Set against a backdrop of lights that must terrify the venue's accountant when the electricity bill drops through the letterbox and the inconvenience of the stage pretty much being at floor level because of the low ceilings, it's a venue where the band has to fight for and to keep the audience's attention, but as they roll off one uplifting triumphant track after the other and hear them being sung back at them with force, that's no concern for them. 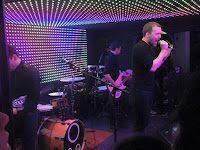 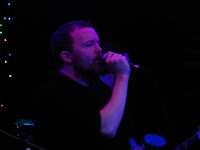 It's the likes of Forever In Your Debt, Don't Mind, Start Again, I Saw A Ghost and Plant The Seed that single by single forced them into the consciousness of music fans in Manchester and further afield in 2015, but it's their ability to craft a distinctive sound and maintain diversity in it across the whole set that has seen them build that ever increasing live following. Jim's bass is fluid, groovy and, dare we say it, sexy whilst Dave's drums provide the driving thrust. The other three Cavalcade songs they play - opener Fool For Your Philosophy, highlight Days Like This Will Break Your Heart and the epic album closer Know The Day Will Come - could equally have been singles such is the strength of the record. Tonight they shine in the more familiar company. The set is rounded off by Sirens, Feet On Fire and One More Minute, all three a world away live these days from the recorded versions on the first album and a sign of how far the band have come.

What tonight's set confirmed is that The Slow Readers Club are set for bigger stages than this. In the last eighteen months they've conquered the art of connecting with their audience and we're watching a different band in terms of the confidence they're exuding from the moment they step on stage. They're making good progress in recording new material to build on what they've already achieved, but for now we'll enjoy them whilst they're still ours.

They headline the Crafted Festival at Manchester's Wonder Inn on February 13th and then St Philips Church on March 18th with more live dates to be announced very soon.