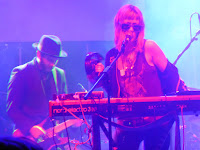 We'd been hoping Black Casino And The Ghost would make their way to Manchester for ages, but we'd never expected it would be in a venue like The Ritz and supporting Kula Shaker. However, stranger things have happened so we roll up in the middle of a thousand and a half people wanting to relive a strange phase twenty years ago where made up language ruled the charts to catch them impress a difficult audience with a real mix of high-energy rock and shimmering electronic balladry, always on the edge of explosion or retreat.

The Ritz is more than half full by the time Black Casino take to the stage and they play a set mixed between their two albums to date - last year's Until The Waters Run Clear and 2013's Some Dogs Think Their Name Is No.

You can sense a little bit of unease at times in the crowd because what Black Casino are producing is something sonically challenging, even more so in the live arena where the lights accentuate the impact of the songs jumping restlessly from one pace and style to another without stopping for breath. It's part of the appeal of the band that their songs are forever moving and never stand still for a moment. Eliza is one minute banging a tambourine into submission, shades and jacket on, the next playing a xylophone, jacket strewn on the floor and making eye contact with the front rows. Gary and Ariel add backing vocals that move from fusing with Eliza's to battling them at times depending on the state and mood of the song, but never sounding out of place. 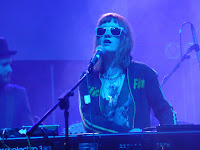 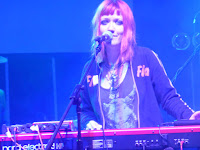 The songs more than hold their own in these surroundings as well, helped by a great sound mix by Ritz standards. The brooding slightly threatening I Like You Cause You're Free and the disturbing atmospherics of Wolf Is Howling are cases in point, the songs and the intensity in which Eliza, Gary, Paul and Ariel deliver them feels just at home here as they do in the bars and venues where they play their own shows.

When they let loose on the likes of lead tracks Boogeyman, Hoboland, Veggie Tarantula and Age Of Contagion, Eliza turns into a dominant leader of the band, exuding a mysterious cool that draws us in and assures her of our attention. They sound like a rock and roll band, but one with all their jagged edges protuding, leaving us unsure as to just what is going to come next.

The reception they get at the end tells us that, despite some people not being able to help themselves in the quieter moments, that Manchester got them, so hopefully that'll mean we shall see them back in more intimate surroundings soon and with a fuller set.