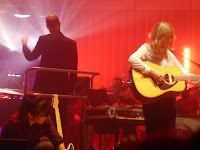 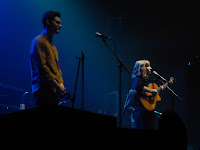 There have been some spectacular orchestral collaborations between rock bands and orchestras in the past few years and we made our way to the North East for a very regional take on this as Newcastle’s Lanterns On The Lake teamed up with the Royal Northern Sinfonia chamber orchestra at their home in the stunning Gateshead Sage for an evening the performers and audience won’t forget in a while.

Opening the evening is Ditte Elly and it’s immediately evident that she’s very nervous, but, rather than that detract from the performance, it serves to highlight the emotional and musical fragility of the songs that she performs. The six songs, mostly from her debut album that’s coming out at the start of March, feel like they’re on the cusp of breakdown and a small gust could blow them away. However, this vulnerability makes her set absolutely compelling.

Accompanied by Mitt on harmonies on some songs and a guy called Adam on clarinet on others, the sparse arrangements of the songs work perfectly and pierce the silent atmosphere of The Sage with their crisp delicacy. Songs like Winter, Red and You Find It Easy mark her out as one of the intriguing singer-songwriters we've seen in a long time and her debut album promises to be quite some record. 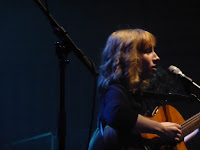 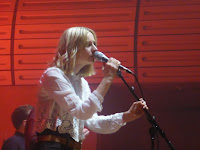 This is Lanterns On The Lake's night though. Of the fourteen songs played the set features nine songs from last year’s Beings album, the main focus of the collaborative process that took place over a nine-month period between the band, the orchestra and the arranger Fiona Brice. The album is dramatic in its delivery on record and therefore perfect for the ambitious scale of tonight’s event.

Hazel moves between guitar and piano throughout the set, starting sat at the piano for Of Dust And Matter, the opening track of Beings, and it’s immediately clear we’re going to be treated to a special evening. The tracks from Beings and their second album Until The Colours Run have the space and the room for the orchestral arrangements to entwine themselves around the structures of the songs to enrich them and provide a different twist to them.

I’ll Stall Them is a prime example of this as it gathers an unstoppable momentum propelled along by a twin drum approach from the band around which the strings provide a dramatic denouement to the song.  Through The Cellar Door feels so fragile at first, held up on the weights of the strings, slowly blossoming into an ecstatic chorus before dropping back and going back round that circle. The audience sit in stunned silence.

The venue contributes to this too as The Sage is one of the finest concert halls in the country, perfect acoustics, sound so crisp you can hear every little nuance in the music and in performers’ voices – and Hazel’s sounds absolutely beautifully expressive tonight – and it accentuates the honest raw intensity that’s pouring out of every note and every word. As Hazel sings “we don’t want to fight, we want the quiet life” on Another Tale From Another English Town as strings create merry mayhem behind her, it feels like Brice has found the perfect language to communicate between these two genres and it’s being delivered word perfect by its actors.

The songs that come from the earliest parts of their career are less infused with the collaborative spirit of the evening, but what they reveal in these refined surroundings is the sheer scale of Lanterns’ oeuvre – the likes of A Kingdom and Lungs Quicken, both from their criminally underrated debut Gracious Tide Take Me Home, possess an emotional intensity and precision that’s played out through the music.

You can tell how much the band enjoy this experience. Hazel and Angela have beaming smiles from start to finish and when the five of them come back after the encore to share the applause with the orchestra, their utter joy at what they’ve just created is unmistakable. They are a band that inexplicably hasn’t garnered the recognition those three albums and their live performances deserve and this is the biggest gig of their career to date, and that fact feels even more incredulous as the evening progresses. Whilst more celebrated bands have garnered praise and accolades for their orchestral collaborations, there will be few that manage to pull it off with this level of success.

Lanterns On The Lake played Of Dust And Matter, Faultlines, Another Tale, A Kingdom, I’ll Stall Them, Through The Cellar Door, Lungs Quicken, Send Me Home, The Crawl, Stepping Down, Beings, Green And Gold, Stuck For An Outline and I Love You Sleepyhead.