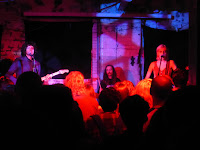 New York trio Sunflower Bean released their debut album Human Ceremony only a week and a half ago and tonight's sold out gig at Soup Kitchen is only their second visit to Manchester. Playing a mix of tracks from the album and their debut EP they stunned an expectant audience with an exciting head rush of art school rock and unavoidable hooks.

The first thing that strikes you with Sunflower Bean is the irresistible chemistry that exists between them, a symbiotic natural feel for the music that allows each of them to loose themselves in their own world without severing the umbilical cord that unites them. Whether it being Julia and Nick's vocals or the guitar and bass colliding, either way the result is a sweet but not saccharine marriage made in musical heaven.

They play most of the excellent Human Ceremony and even by the high standards the studio album sets these songs are transformed. It feels like this dark Manchester basement has been taken back time decades and transported to their home city of New York - there's echoes of the harder edges of Velvet Underground and Talking Heads here, but it's delivered with a style that's uniquely Sunflower Bean. The vocals duel at points, at others they play a game of call and response, but without the two of them ever making eye contact whilst singing. The whole shebang is driven along by Jacob's drums that dictate the pace, signal a song or a jam changing direction completely and ultimately have the control of proceedings. 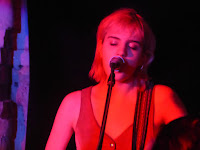 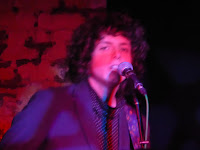 The crowd are transfixed. They have an effortless aloof but not distant aura that comes from them knowing just how good they are and how much they love what they do. Julia comes into the crowd at one point, at another she drops to her knees, Nick holds his guitar above his head and plays it as one song tricks us with a false ending and comes back in.

It's all well and good having the rock and roll style and cool, but Sunflower Bean ultimately have the songs to back this up as well. The likes of 2013, Somebody Call A Doctor and Space Exploration Disaster are punky fierce assaults on the senses, pummeling the listener into submission, but leaving us with the warm glow of the tunes and melodies that break free from their walls of sound.

Sunflower Bean are a band to fall in love with, one that isn't afraid to look backwards in order to look forwards and an utterly compelling live proposition.