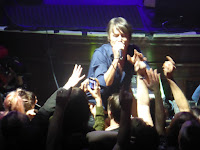 Suede made a triumphant return to Manchester to play a two-part set at a packed full Albert Hall, the first of which was played behind a screen showing the film to their latest album Night Thoughts which was played in order and then after a short interval a run through most of their biggest hit singles.

It's always difficult for what are classed disparagingly and disrespectfully by certain groups in the media and industry as "heritage bands" to release and promote new material, however good it might be, because of the constant wish of large parts of the audience to hear those songs that brought them to the band the first time round. Suede, like an increasing number of bands, have however refused to rest on their laurels and have recently released Night Thoughts, their second album since they reformed in 2010, and it's one of their strongest works to date.

The album is accompanied by a DVD that contains a film that the album is an imaginary soundtrack to and they've come up with the innovative concept of playing the album in full behind a screen that's showing the film. Stick with us, as we know that idea on paper looks preposterous and self-indulgent, but in fact it's a very clever way of holding an audience's attention and to have them focus on the new material without baying for the old favourites. There's no opportunity to shout for a big hit when Brett addresses the audience because he doesn't - they just move from one song to the next and people are transfixed to the screen and there's little of the usual mutterings from those who want instant gratification and shout "play one we know" revealing their own ignorance of the band they've just paid thirty quid plus to watch. 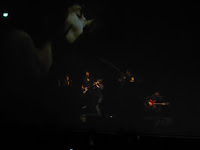 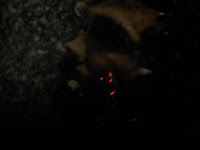 The album itself is possibly their strongest piece of work viewed as a continuum. Whilst it lacks the obvious hit singles - although we're certain Outsiders and I Don't Know How To Reach You would have bothered the Top Of The Pops schedulers at the height of Britpop - it has a rich purpose running right through the middle of it. Brett's voice sounds even more powerful than ever, enhanced, it has to be said, by the best sound we've heard in the Albert Hall so far. There's a wonderful flow to the album that translates wonderfully both to the film, although we're still not sure what the stories are meant to represent, as well as live performance. At points the band become visible behind the screen through clever use of lighting. It's a very bold statement to make to present a new album this way, to force your audience to listen to each and every song and to do it behind the veil of the projection screen, but it's an absolute triumph.

The second half is equally successful, but for very different reasons. It reads like one of the most impressive musical CVs of the past two decades - a band that retained its charismatic sound through turbulent times and even when the albums might not have been perfect as a whole (as Brett freely admits describing A New Morning as "crap with only three good songs" and Head Music simply as "OK") they still had songs of the calibre of Obsessions and Everything Will Flow which could fight their corner against the monolithic pillars of those first three albums. As they reel off Animal Nitrate, So Young and Metal Mickey from the debut, New Generation from Dog Man Star and Trash, Filmstar and Beautiful Ones off Coming Up, you see just how many great songs they have written and which they squeeze into this set. 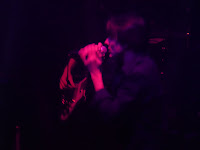 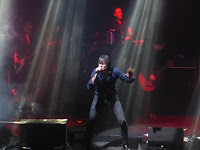 There's a fabulous energy to the set as well. Musically they're on the money, the songs sound fresher and more vibrant than they've ever been and still feel modern and of our time, having aged to perfection. Brett belies a man close to fifty, shirt open, abs revealed, bouncing around and taking the show to, and into, the audience who push and shove to touch him, to be the focus of his attention for a nanosecond. It's an adulation that's reserved for special acts that have touched people and Suede prove tonight they've done that. The whole venue is on its feet and every word of those early songs are sung back with a bravado and gusto that takes Brett aback at points.

Tonight was a game of two halves, but Suede won them both with ease conquering the challenge of how to present new material to an audience that might not be familiar with it or be anticipating something different as well as proving their undeniable place in the realm of great British bands of the last twenty years with the second set.

Suede played When You Are Young, Outsiders, No Tomorrow, Pale Snow, I Don't Know How To Reach You, What I'm Trying To Tell You, Tightrope, Learning To Be, Like Kids, I Can't Give Her What She Wants, When You Were Young, The Fur And The Feathers, Introducing The Band, Killing Of A Flashboy, Trash, Animal Nitrate, Filmstar, Sabotage, Obsessions, So Young, Metal Mickey, Beautiful Ones, Everything Will Flow and New Generation.