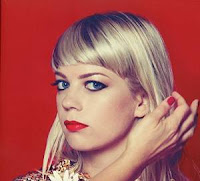 Good Advice is Canadian Basia Bulat's fourth studio album and her most ambitious and accessible to date. From start to finish it's an upbeat record that showcases a talent that's blossomed over the course of three albums despite not reaching the commerical success they deserved. Hopefully Good Advice will be the point where that changes and she gets recognised as one of the most unique talents around.

Right from the start of La La Lie, this is an upbeat record that has Basia's beautifully evocative voice centre stage, but the production and the arrangements create the decorative canvas for her to paint beautiful melodies and dark stories. A lot of that is down to her trading in her electronic harp for synthesizers which means that the songs on this record are more immediately accessible than before without losing the intimacy.

For a record that's so forthright in its approach, like so many great records it's one drenched in pathos, dealing with the break-up of a relationship. La La Lie broaches the subject with the admission "I can keep up although I won't feel alright for weeks" and the theme continues throughout the acceptance of The Long Goodbye as if the record is Basia's form of catharsis. Wondrous layered effects on the vocals on Let Me In feel like they're combining to expel the dark feelings of "being stranded at the door outside" and have a similar effect on In The Name Of where Basia sings of trying to break a spell of a lost love before the song departs into a wild instrumental cacophony.

Time and the title track are more familiar ground, the record slowing down slightly at this point, but that gives Basia range to show the incredible depth to her voice. The former hints at a sense of hope as Basia tells the song's subject that "I can hold on to some time for you" whilst a simmering keyboard provides the underpinning of Good Advice. Infamous returns to the bolder more expansive sound, but the subject matter doesn't change, Basia holding on to hope declaring "don't waste my time pretending love is somewhere else" whilst Fool sees her declaring "I'm still your fool" in a vibrant tone that's in direct antithesis with the subject.

The string-laden musical drama of The Garden sees a change of tack, going from hope and reflection into a mood of resignation "I won't look back, I know I won't" as the demons start to be expunged to a backdrop that just heightens the tension and twists the emotions still further whilst the closing Someday Soon starts the process of moving on with "I'll be gone someday soon" as the cycle comes full circle and the story draws to its conclusion.

Basia is huge in her native Canada. Last time she toured here she played small venues but captivated the crowds she played to with her unnerving charm. It'll be interesting to see how she translates this bolder sound and the emotional outpourings of these song into that live environment, but for now Good Advice is already shaping up to be one of the more unlikely crossover albums of the year and hopefully it will place Basia in her rightful place alongside the likes of Joanna Newsom and Julia Holter in the wider conscience of the UK record-buying public.