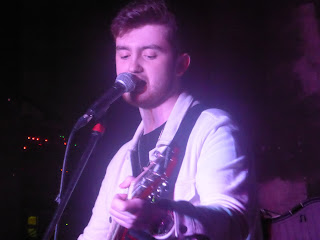 Lunar are one of the city's most promising young bands and their front man Sam Carson has also been making a name for himself with some solo acoustic performances that have had some compare him with a young Liam Fray. We went along to see him open for The Crookes and Misty Miller at Sound Control on Saturday night and left impressed by a young man with no shortage of confidence and the songs to back it up.

Opening slots at early start gigs are always a poisoned chalice. The venue's often empty and the people there are the hardcore fans of the headliners waiting for their heroes and not particularly interested in the local opener.

The Fray comparisons are valid up to a point when you take it down to the bare basics which are an eye for a song with an immediate hook and an ability to forge stories into them that talk to his generation. There's already a really varied range to the songs in the set - Love And Affection and Second Time, which is making its debut tonight, are slower and more considered but have no less impact in contrast to the frenetic Come Home and Gonna Get You Down and the two singles. But he's got a vocal style and personality of his own that should allow him to swerve that pigeonholing. 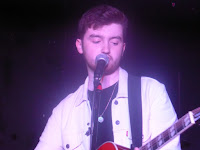 There's no reliance on covers to try and grab the audience's attention as many acoustic opening acts resort to as an easy way to grab people. You could imagine in five years time some of the next batch of ambitious young men covering the likes of Lunar's infectious debut single Our Way and his closing song, the biting Showboater which will probably be their next.

Sam played Girl At Home, Gonna Get You Down, Love And Affection, Our Way, Second Time, Come Home and  Showboater.