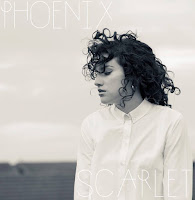 Tip time again for Even The Stars on Shell Zenner's show on Amazing Radio and this week we've chosen a wonderful solo artist from London called Scarlet (not to be confused with the wonderful band from Liverpool of the same name). Her track X has been gathering rave reviews ahead of its release on her debut Phoenix EP. We had a chat with her to find out a little more about her.

First of all, Scarlet, can you tell us a little about yourself and how you got into music?

I'm a young singer-songwriter from London. I've always loved music, and began singing at a very young age. My Dad was always singing around the house and I picked up on his habit. ,My Grandad and Mum encouraged me to learn the piano and I started lessons at the age of 6 I took up  the guitar in my teens and I wrote my first song aged 14.

Are you songs all written by you or do you write with other people?

I write on every single one of my songs. Usually I do co-writes with producers so it will just be the two of us. My "Phoenix" EP is a co write. I'm a top line writer so I enjoy writing the melody and lyrics most.

What set-up do you use when you play live - can tell us a little about your band?

At the moment when I play live it is just myself and my guitarist. He uses an acoustic guitar, and sometimes I'll play along with him. We're incorporating the use of a loop pedal into our sets now. I used to be in an alternative rock band so have played with a full band set up, but I wanted to strip it all back.

You've been played by BBC Introducing and X Radio and now Amazing Radio - how does it feel hearing your songs on the radio?

It was the most surreal experience hearing my song on the radio. It's something I've been dreaming and working towards my whole life, and to have such prolific radio stations playing your songs - ones which I listen to on a daily basis was just amazing.

Is there a plan to properly release the Phoenix EP and do you have more songs recorded ready to go?

I do plan to put everything online. At the moment the only song available which is up is Phoenix on my Soundcloud. I will be uploading the Phoenix EP on iTunes, Spotify etc in the next couple of weeks. I have tons of other songs written, some ready to go and some still in a demo stage. I really enjoy playing them at gigs and getting a feel from the audience.

What would be your main ambition to achieve with your music?

My main ambition with my music, like it always has been, is to get it out there and for it to connect with people. I don't do this for money or for fame, I do it because I love music and have a lot to say. I think I speak for some of the underdogs who don't have to feel that way. I want to Empower people with my music, it means just as much if it connects with one person or a million people. My dream is to headline Glastonbury festival.

2016 My plan is to get more live sessions on national radio stations. Release the EP. Play a whole load of gigs and support slots for more established artists. Keep releasing new music.

One final question, how would you describe your music to anyone who hasn't heard you before?

My music is acoustic guitar lead, with mixes of pop, rock & folk. I have a big belting voice which lots of people don't expect when they see me, and I feel my songs have catchy melodies and cool rhythms