Track Of The Day : She Drew The Gun - Poem 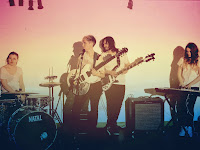 Poem is the latest single from She Drew The Gun ahead of the release of their much-anticipated debut album Memories Of The Future in March. The song, from one of top five tips for 2016, is one of the pointed pieces of social and political commentary set to music for years.

Poem very directly addresses the situation of the homeless and the attempts of authorities to remove them from our streets without any care for the individuals in question - "they've got police getting busy, cleaning up the streets, because that we need now to make things neat, take the homeless man's rags, no sleeping bags, no place to sleep, because we're far too civilised around here to see an unkempt man" - as well as the sell-off of public assets to big companies - "the markets are demanding that we give away for free everything our grandparents fought for - it's called wealth creation." It pulls no punches at all, but finishes with an optimistic call for action from those who feel the same way - "there's still time if you feel the same way too."


Memories Of The Future is released on April 22 and featuring eleven tracks including their first three singles - Where I End You Begin, Since You Were Not Mine, If You Could See, Chains, Pebbles, What Will You Do, Poem, I Am Not Alone, Be Mine, Pit Pony and Or So I Thought

She Drew The Gun's official site can be found here and they are on Facebook, Twitter and Soundcloud.