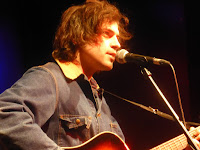 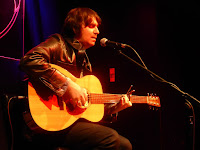 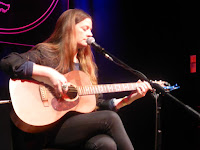 The word genius is often overused and we're guilty of that sometimes. It should be reserved for unique, inimitable talents. Ryley Walker is one such example. At his Band On The Wall show on Sunday he held an audience that wasn't wholly his own captive for an hour and a quarter with songs from his forthcoming unheard third album and guitar playing, vocals and a performance that left us stunned in silence.

Opening the evening was Meg Baird, lead singer of Espers, but with three solo albums under her belt as well. Her set was a perfect opening to the evening, slow, gentle, but with the seductive haunting lilting tones of her voice holding the audience's attention as her seven song set focused on five from her most recent album Don't Weigh Down The Light, starting with Counterfeiters and Back To You, before finishing on a cover of John Martyn's Spencer The Rover. The as always perfect sound of Band On The Wall serves to accentuate the ethereal otherworldly feel of the songs, sending a chill up our spine such is the fragile intensity of the performance. 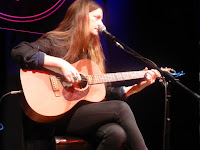 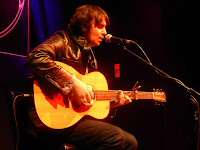 Next up is Lee Southall, formerly of The Coral, and he adopts a more direct and honest approach, preferring to sing from personal experiences as he previews tracks from his long-awaited debut solo album due in the summer whether it be Yesterday Morning written for his daughter, Under The Weather or Spread Your Wings. There's a genuine warmth to both his guitar playing and his vocal delivery that stands him out from so many singer songwriters, particularly in the final track In Accordance.  At the end of his set, he looks genuinely taken aback by the prolonged applause he receives, but it's completely deserved for an accomplished performance that lays his feelings and emotions on the line through the medium of his songs. We look forward to his solo album.

The evening had been billed as a collaboration between Ryley and legendary double bassist Danny Thompson, but illness meant at late notice Danny had to withdraw, but Ryley stepped up with a solo show that treated us to the vast majority of his as-yet-unreleased third album that we hope to hear before the end of the year. We suspect a large section of the crowd were here to see Danny, but stayed to witness one of the most compelling live sets we've ever had the pleasure to see.

Part of Ryley's appeal is the way he makes everything look so effortless, he ambles on stage, tells us he's going to plug his shit in, fiddles around for a minute and then suddenly starts playing a beautiful melody. His fingers are almost a blur as he coaxes sounds from the guitar with pretty much no use of effects yet you wonder just where it's coming from. Song after song he manages to somehow create something that has you scratching your head as how he's managed to create such majesty with just an acoustic guitar and a pick. At points he looks like he's staring into the near distance, transfixed in a world of his own as in the middle section of Sullen Mind, oblivious to us, yet we can't avert our gaze as he lets loose. 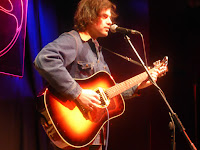 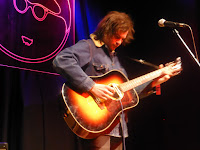 His voice is that of a sound of a thousand stolen cigarettes, husky yet smooth, deep but also with a subtle emphasis that portrays a world-weary view that betrays his twenty six years. He's a troubadour in the truest sense of the world, recounting stories made up in his head. Great And Undecided talks of finding jobs after crossing the state line to escape home whilst Roundabout is about growing up back in his home town in Illinois and being hated by all his class mates and which includes the unforgettable line "I'll buy you a drink, but my credit is quite shit, we can all laugh and have tap water" displaying a wicked observational humour and self-deprecation throughout, informing us that after a line about something costing ten dollars that it's about eight pounds.

Despite none of us having heard most of the first three-quarters of the set before and a large part of the crowd potentially being there for Danny rather than him, there's hardly a sound from the audience that's held in his spell as he seduces yet another miraculous sound from that battered old guitar other than a gathering increasing crescendo of applause at the end of each song.

The new songs feel like a progression from his previous album Primrose Green and there feels a little more direct focus to his set at Gullivers around twelve months ago when he wowed us with seventeen minute versions of songs from that album, but he never loses the feeling that this performance is the most natural thing in the world.

He's charmingly engaging throughout asking if Mark E Smith is here as he's a Fall obsessive and always puts him on the guestlist and claiming that he's not a robot because he needs to go to the bathroom between the main set and the encore. There's then a moment where he mishears someone ask if he'd had a piss as had he got a pick. He also dedicates a song to people who put signs for Donald Trump in their yards. He does finish the set with what he jokingly calls "the hits" with Funny Thing She Said, Summer Dress, Primrose Green and On the Banks Of The Old Kishwaukee before concluding by asking Meg back on stage for a duet of the traditional folk of Rosemary Lane.

Ryley Walker is a singularly unique natural talent, the sort that never gets the recognition they deserve at the time but who gets revered by those that have stumbled across him by whatever means. His music is for dark smoky rooms late at night with a crisp sharp peaty single malt, no two live performances are ever the same because the ever wandering creative mind that drives him doesn't allow him to repeat anything or get caught in that cycle. And we've never seen anyone quite so capable of creating an amazing sound from just a battered and bruised acoustic guitar and rudimentary pedals. His third album is going to be some record on the basis of tonight.

Meg Baird's official site can be found here and she is on Twitter.