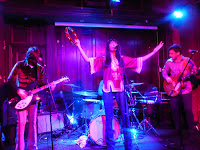 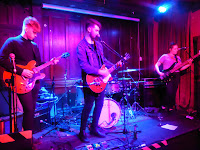 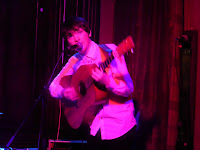 Easter Sunday saw a very different trio of acts take over the music room of The Castle in Manchester, starting with the acoustic songsmith Ryan Jarvis, followed by one of Manchester's rising stars in the band Lunar and topped off with the psychedelic and soulful tunes of Vermillion Tides.

Ryan has been a regular on the acoustic scene in Manchester for a number of years now since his debut EP Outside This Town made people stand up and notice a songwriter with a unique talent of crafting songs that make detailed and telling observations on life in Manchester. He's about to go in and record a new single with a band, although that single is absent from the set as he's playing hard to get with it and intriguingly doesn't want to play it acoustically just yet. He throws in a cheeky cover of Cindi Lauper's Girls Just Wanna Have Fun and finishes with Outside This Town.However, his new songs Comedown Love and Alright in particular seem to suggest that he might be getting ready for a big assault in 2016 reinvigorated by his support slot with The Courteeners at the end of last year.

Next up are Lunar and they go for the jugular straight away with their debut single Our Way. They struggle a bit with sound issues throughout the set, but they admirably fight through that to demonstrate just why their raw talent (you can still count the number of gigs they've done on your fingers) is creating a buzz for them ahead of their Academy 3 headline slot a week on Saturday. Come Home and Gonna Get You Down sound like ready-made singles in the bag to follow up their forthcoming release Showboater, which is a two-minute hit-and-run assault on the senses.

They're at their most potent when front man Sam and bass player Christie's vocals collide to create a heady boy-girl mix that's sadly lacking these days, but throughout the set they demonstrate what great strides they've taken in the six months from their first gig. Even those sound issues can't throw them off course and as they finish with their fierce cover of Faithless's Insomnia, the scene is set for them to take over the Academy and then onwards to the bigger stages of the city.

Vermillion Tides hail from Halifax and are the new project of ex-Twisted Wheel man Blair Murray, but it's their singer Natalie that's the real star of their show. Looking and sounding like she's walked off 1970s Haight-Astbury, her voice is sweet and soulful in parts, hard to match the funk stylings of some of the songs in others whilst she's a bundle of energy, throwing shapes and patterns across the cramped surroundings of the stage, whilst her band mates paint the canvas for her.

They've got an impressive set of a dozen songs as well for a band that's only started last year. The only dip is mid-set when they take the pace down, but that's hampered by a couple of problems with amps that break up the momentum of the set leaving us all to ponder Blair's trousers. Their recent single Atom Bomb and its other side Fortune Cookie provide two of the highlights of the set, but there's more along the lines of Lucky Finger and Apocalypse Now that scream future singles at us.