Track Of The Day : Cupids - Kickin' In 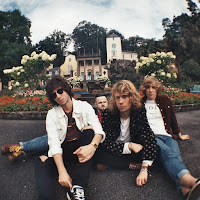 Kickin' In is Cupids' third single in the past six months and their best one yet. With Jake on lead vocals, it's already a big live favourite and they've captured the crowd-pleasing huge riff perfectly on the recorded version.

The North West four piece made a brand new start last year after several years as Gramotones with a beefed up sound and their previous two singles Money and Confession Box showcased a band on a mission and Kickin In' steps that up a further notch. Huge vocal harmonies swirl around the chorus, making full use of the fact there's at least three great vocalists in the band, whilst there's a power in the guitar chords and the drums that they've never quite generated before. It's even accompanied by a great live in the rehearsal room video that fits the song perfectly.

Kickin' In is out now digitally on iTunes.