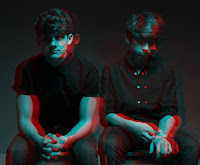 Nonsense is the debut single from Manchester's Violet Society and they've created a brilliant crossover track that shows immense promise for their first release.

Inspired by their background in classical guitar and with inventive use of racing strings, brothers Alfie and Joe formed the band and enlisted the help of friend Victoria Farrel-Read on violin for Nonsense. For a first single, Nonsense feels like a band that's already confident of its own sound and the impact it can have on the listener rather than one that's still trying to find its own identity.

Joe is playing an acoustic gig at Seven Miles Out in Stockport on April 16.