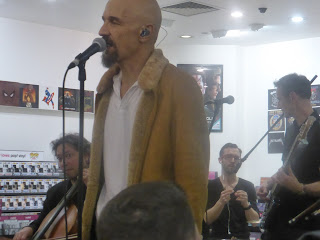 As part of the launch campaign for their new album Girl At The End Of The World, which is sitting very pretty at number 1 in the midweek charts, James performed a short acoustic set in Manchester HMV's before embarking on a mammoth signing session. We watched them strip back some of the more electronic elements of the new album and distill them into something quite beautiful.

In true James tradition they kept us waiting for this very intimate experience with some of the dedicated 300 or souls having queued from before lunch time to get up close and personal with their heroes being made to wait another half an hour past the 5.15 advertised time after the soundcheck overran, but no one cared once this six-piece incarnation of James - Tim, Jim, Saul, Adrian, Mark and Swiss Ron - made their way to the stage. They're clearly in high spirits buoyed by the almost universally positive response to their latest album.

They open with the title track from the album which Tim explains is about the moment your life flashes before your eyes and the girl who you think about at that time when you think you're about to lose everything. In this stripped down form, Tim's voice has more room to breathe and sounds even more emotional than it does on the record whilst the band, as they've proved time and time again, are adept at crafting beautiful new variants on their songs dependent on the members of the band available and the situation.

Feet Of Clay comes next and Tim tells us that this and Girl are the two songs that continue the theme of exploring mortality that they dealt with in such depth on La Petite Mort. It is one of those songs that James do so beautifully but so rarely - it revels in its own fragility, on the edge of breakdown and this rarefied setting makes it even more so, Adrian showing his versatility with a cello and Saul violin which add to the aching longing feeling of the song. 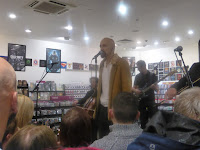 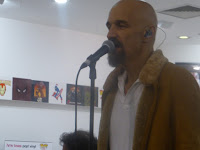 Tim jokes between songs that Adrian is trying to beat Rod Hull's record for the most instruments being played in five minutes before Jim corrects him by pointing out it's Roy Castle who was the Record Breakers guy before the conversation descends into Jim telling Tim that Rod Hull died trying to adjust the aerial on his roof and falling. Tim then tells the story of Hardwick Live last year when they played with a thunderstorm raging around them with the risk of being hit by lightning amidst a biblical downpour.

Next up is the future single Dear John and the song of the four that they play that undergoes the biggest transformation. The electronic beats that make the song one of the album's high points are replaced by something far more subtle - Jim's bass line comes to the fore on this one and it feels almost like a different song to its original, whilst losing none of the pathos of the underlying message.

They finish off with a rousing Nothing But Love, their most recent single and the song that seems to be doing so much positive work for them at the moment. Shorn of the delicious production of the album version, it feels even more intense, the emotion cracking in Tim's voice as he reaches for the peaks in the song aided by Adrian, Ron and Saul providing those unmistakable lifting backing vocals that make the song such a stand out.

And then they're gone after a sweet but very short set, not that the gathered fans are complaining as they queue up for the band to come and sign their albums. Girl At The End Of The World may or may not become James' first number one studio album (their previous number one was 1998's Best Of), but it appears to have reinvigorated the band yet again and the reinterpretation of the songs is testament to the fact their creative spirit is still surging through their veins.