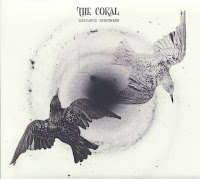 Distance Inbetween is the first album by The Coral for six years and it's possibly their finest to date. It's an album with a timeless feel to it and one whose immediacy has you hooked from the minute The Connector's looping guitar leeches into your conscience and doesn't let go until the weirdness of the instrumental outro End Credits releases you from its grasp.

It's an album that's unmistakably The Coral, it feels like they've crafted something magnificent from all the best parts of all their favourite records and made it something that's uniquely them. It has all those drop-dead gorgeous vocal harmonies that lift you up and spin you round, the psychedelic guitars, that feel that there's so much going on in the record yet at the same time it never once feels cluttered or overdone. There's moments of genuine euphoria such as the point when the chorus of Holy Revelation kicks in with its evangelical lift and carries the listener along on a wave of ecstasy or the fuzzed up Fear Machine and its insistent persistent guitar riff that runs throughout it. Everything has the instant hit of familiarity, but couched in a new brilliance and inventiveness that makes it something truly outstanding and original.

The highlight for us is the title track, its hopeless romanticism will leave you close to tears such is the way it grabs at your heartstrings leaving you powerless to resist its charms. Whether it's the moment it starts with a solitary piano and single notes before the drum and guitar kick in or whether as James almost nonchalantly tells the objective of his desire "I will come to your door, I will crawl through the latches and I will kiss you like before." It's a hard call though as there isn't a weak track on the record. The six years since Butterfly's House, and the rumoured scrapping of albums in the interim in the search for perfection, feel like they've been worth every second.

Distance Inbetween is The Coral's masterpiece. They're at the very pinnacle point of the wonderful set of bands coming out of their home city of Liverpool at the moment and Distance Inbetween raises the bar even higher for the likes of the pretenders to their throne The Vryll Society and Sundowners (and pretty much everyone else around) as they ready albums.

Email ThisBlogThis!Share to TwitterShare to FacebookShare to Pinterest
Labels: The Coral