Desert Mountain Tribe - Either That Or The Moon 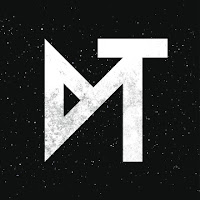 The run of great psychedelic rock records continues with this, the debut release from London based trio Desert Mountain Tribe.

The band first came to our attention at Manchester's Cosmosis Festival last spring and we were suitably impressed with their set at Gulliver's late last year too. Make no mistake. Either That Or The Moon is a big and bold debut from Desert Mountain Tribe, demonstrating their love of rock n roll, psychedelia and pop.

Opening gambit Feel The Light has an air of both (elder statesmen) Spacemen 3 and (young pioneers) The Lucid Dream. Whilst Jonty’s vocals and guitar stay true to their psych leanings, the rhythm section of Phillip and Felix tread a very different path from what you would expect. Instead they favour more of a dance orientated sound thus giving Desert Mountain Tribe something of an edge over their contemporaries. Take A Ride is even better and at just three minutes long doesn't outstay its welcome. Midnight Sky is more of a soundscape and would be perfect late night festival material.

The opening trio of tunes really demonstrate the diversity of Desert Mountain Tribe before the Factory-esq joy of Heaven and Hell. Dominated by a thumping bass line and a simple vocal, it is one the standout tracks. Runway kicks in sounding like Sonic Youth at their menacing yet melodic best. Enos In Space is the lightest, fluffiest tune on offer here. Desert Mountain Tribe are at their most laid back on Way Down, yet they still maintain a real groove. OC Dream is the most reflective track on the album.

Interstellar is an epic, epic ending to a stunning debut. The band slow the pace right down to deliver a simple yet effective conclusion. But before it is all over, there is the small matter of some enthralling bonus material.

Coming Down is a suitably impressive bonus track, taken from their rare 2014 single. Leave It Behind, the second bonus track is another groove-laden tune awash with swirling guitars and a commanding bass line. It's Desert Mountain Tribe’s secret weapon - that ability to blend rock and psychedelia with a little dab of dance music which makes them so appealing.

It is easy to be drawn in and absorbed by Either That Or The Moon. Some of the song titles might be a bit clichéd but we can forgive them for that as the band have delivered a well produced collection of songs which we will enjoy over and over again.