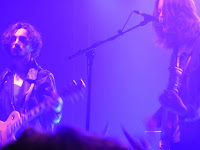 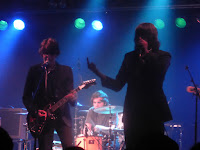 Blossoms returned to Liverpool O2 Academy where they supported Courteeners last summer as headliners in their own right. Sold out weeks in advance, they thrilled a packed and young crowd with a mix of their run of killer singles and tracks from their recent EPs and left us anticipating their forthcoming debut album even more than ever.

As with all the shows on this Blossoms tour, the opening slot is a recording of a Viola Beach show recording from the night before they met their untimely death in Sweden. With the full light show and a fairly full venue, it’s still weirdly eerie, particularly when Kris speaks and when you reflect on what they might have become had tragedy not taken them so early.

Cabbage are a last-minute stand in for The Vryll Society whose hometown show was cancelled due to illness, but they're more than up to the challenge. They've even dressed in jackets for the occasion, but there's nothing formal about how they take on the crowd with their politically and socially aware songs about being born and dying in the NHS (Necroflat In The Palace) and their recent debut single Kevin with Lee repeatedly coming down to the barrier.

It’s a bit less mental than their set at the Deaf Institute the previous night, as if they’re auditioning for the right to play these stages in their own right, but if anything them being a little more focused shows us that they’re more than just a hit and run band. The guitars sound huge, fuzzy, scruffy yet thrilling, the drum beats like a racing heart and Lee and Joe’s vocals wrap themselves around each other as the boys do themselves as they embrace. We’re not entirely sure what the audience make of them as we suspect quite a few will never have heard anything like them before, but they’ve got something special going on, we’re not quite sure what it is but it’s there. 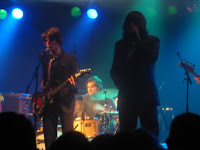 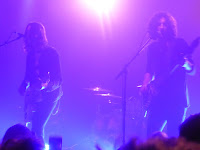 Every time we see Blossoms we're even more amazed in their transformation from a band with a bucket load of potential into what they are now - on the cusp on releasing what could be a landmark debut album and a band that straddles styles and generations without breaking sweat. The crowd is unfeasibly young and you wonder for how many this might be their first gig and Blossoms their first musical love and how that means that we might be turning the tide against the X Factor.

There's moments of unashamed perfect pure pop in Blossoms' set, each song seems to have an irresistible, yet very different, hook that grabs you and doesn’t let go. Yet there’s also moments such in the magnificently brooding Smoke or the flipped out denouement of Blow where they’re a completely different beast. There’s plenty of markers in between, the blissed out funk of EP tracks Fourteen and Across The Moor, the almost glam rock of Wretched Fate and Polka Dot Bones prime examples of a band with what must be the finest record collection in Stockport. None of those four songs are likely to make the album as they come from the last two Charlemagne and At Most A Kiss such is the strength of the canon of the songs Blossoms already have in their armoury. They even add in a cover of WSTRN’s In2U which they make their own including Tom’s rap in the breakdown.

Of course it’s the big singles that get the best response. They open with the dynamic duo of Cut Me And I’ll Bleed and At Most A Kiss and conclude with a frenzied Charlemagne, which is preceded by a dedication to Viola Beach and Craig Tarry and a minute’s applause, and a stretched out Blow. Blown Rose segues in from the equally romantically tinged My Favourite Room, which surely is going to be a single at some point.

New song Get Away is introduced as being from the new album and it’s in a similar vein to Blown Rose, ushered in by a strummed acoustic through a chorus that you find yourself singing along to by the end even though you’ve never heard it. And that’s why Blossoms have suddenly won hearts and minds and gone from playing the 400 capacity Academy 2 to selling this 2,000 capacity room out weeks in advance.

Whilst they’ve attracted some of the lad element from Courteeners (some even think it’s cool to sing that refrain from What Took You So Long in anticipation of the band coming on), their crowd is a broad spectrum of male and female and all ages. Every time we see them the possibilities that they can achieve seem wider and bigger and they’ve got the humble confidence to leave us thinking they’ll achieve them without breaking stride.