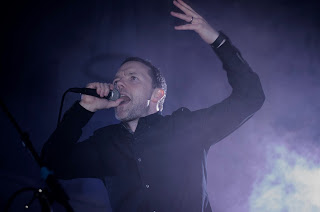 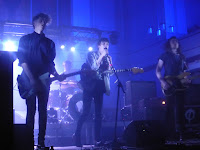 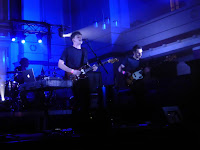 The Slow Readers Club's unstoppable rise continued with their latest sold out weeks in advance show in the splendid intimate surroundings of Salford's St Philips Church supported by two of the rising stars of the underground music scene in Delamere and October Drift. A set that mixed their two albums with a couple of old favourites brought back into the set to delighted an adoring crowd and provided a fitting send off for their own April UK dates and their May tour with James.

October Drift are first on and it's the first time we've seen them since they formed out of the ashes of The Darlingtons what seems like an age ago. By the end of the set we almost expect them to yell "Goodnight Wembley" to a cascade of fireworks from behind the stage such is the size of the show they try to pull off. They deal in big rock songs, charging round the stage like men possessed and, in front man Kiran's case, the aisle of the church and later singing one song from the pulpit. They play like it's the most important thirty minutes of their life, as is the gig is a matter of life and death, such is the intensity of their performance.

It could all be a terrible jumbled mess of overblown pomp, but it isn't, it's a massive success because they have the songs and the playing ability that keeps them well over the right side of the line. As well as the visual showpiece they create, their songs are also full of dramatic changes of pace, frenzied energy and the unquenchable intent to win over their audience. Their set already feels like it's a greatest hits and that's no surprise considering they start with their first two singles You Are You Are and Whoever as well as playing the most recent Robots and their best one yet Losing My Touch which is due out next week and the other three songs they play, including the fabulous set closer The Past don't let the standard drop. 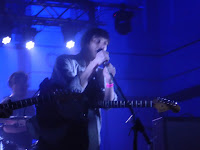 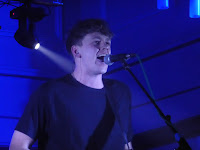 Delamere take a very different approach, their intricately crafted take on alternative electro pop is guaranteed to get your feet tapping even on first hearing of them and to tug at your heartstrings. They've got two new songs from their forthcoming album which they play live for the first time tonight - So Long and, in particular, Black And White Space - that are a massive step up for them alongside their forthcoming single Kill It, an infectious catchy track that seems certain to win them even more fans.

There's an energy to Delamere's live show that transmits perfectly from band to audience, whether it be their keyboard tones or the lone drum that front man James beats to create what feels like a vital tribal rhythm. They dispense of any attempts to play things cool and want the audience to have as much fun as they're clearly having. When they finish with recent single Heart, a big beautiful electronic anthem that has gathered them so many friends, they've won over a whole load more. 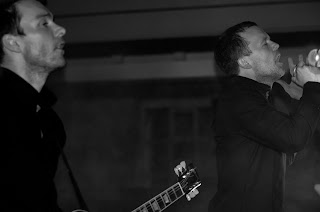 But no disrespect intended to those two acts, they're not why the majority of the crowd are here. Infinitely polite and seated until the band make it on stage, such pleasantries are forgotten as the band strike up Fool For Your Philosophy and everyone congregates around the slightly awkward steps that separate the band from their fans. It's incredible to witness just how much love there is now for the band that eighteen months ago with pretty much the same set of songs were struggling to get a break. It's testament to their unerring belief in the quality of their work and the power of word of mouth to help spread the gospel that they're now about to embark on a tour with James, a band that took a similar path nearly thirty years ago before they took off.

The set is a heady mix of their two albums, and it's great to see them getting slots of an hour now to give us the full Slow Readers Club experience rather than a potted summary that leaves us streaming out bemoaning the absence of one of our favourites. A roll call of the songs - Fool For Your Philosophy, Sirens, Start Again, Days Like This Will Break Your Heart, Don't Mind, I Saw A Ghost, Forever In Your Debt, Block Out The Sun, Plant The Seed, One More Minute and Know The Day Will Come making up the main part of the set - reveals a band that has an in-built ability to create songs that mean something to people, that touch people's hidden inner self and bring it outwards with others in a celebration that it's alright not to be alright, whether it be the turmoil turned into celebration that is I Saw A Ghost, the post-relationship down of Start Again that gets transformed from a grieving of love lost into something more powerful by the music or the stadium-sized angst of One More Minute's "stop right for one more minute, I'm not sure that I want in it" that touches on that uncertainty everyone feels in making a big life-changing step. 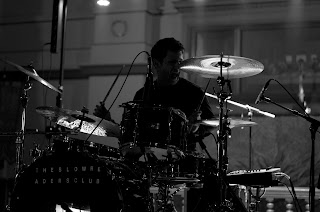 Once the sound problems in the first two songs are sorted out, the church feels like the absolute appropriate place for this next revelation along their path. Their sound is perfect for this hallowed space as it fills the cavernous areas that are simply not there in the club venues of town that they've played to date. That translation from sweaty dingy clubs to big halls is not one that all bands can make and they get lost, but The Slow Readers Club feel like they're made for bigger spaces. Whether it be the pounding drum beats that David uses to drive the songs along, the delicious grooves that Jim teases from his bass and Kurt from his guitar or Aaron's bold confident vocals and increasingly powerful stage presence, it feels like their time is now. 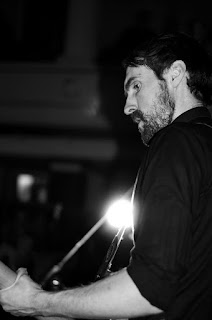 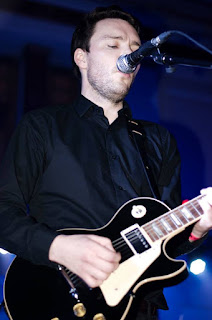 The encore starts with Aaron performing a rare solo acoustic version of Stop Wasting My Time from their debut, before the rest of the band return for Lost Boys, a song that's been absent from their set for a while due to the focus on Cavalcade as their most recent release. They leave us dancing out the doors to the rampant stomp of Feet On Fire as we excitedly regroup to talk about what we've just witnessed - a band on the cusp of something truly special that will soon in all likelihood no longer be our own secret.