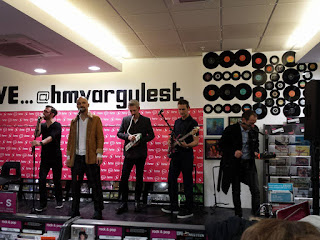 The final day of promo duties for Girl At The End Of The World sees James on top form in their second city of Glasgow. Ever present Glaswegian James aficionado Stuart Ralston was there as the band aim to hold on to their midweek number one slot in the album chart.

Despite being well into their third decade, this is the first ever Scottish in store appearance from James. It is short and sweet but the assembled masses on a Wednesday afternoon love it. A three-song stripped back set opens with a delicate yet beautiful Feet of Clay from the album they are here to promote. Saul has sound issues with his violin - the audience don't however as we can hear it perfectly but Saul shares a few expletives which results in a ribbing from Tim as they have just had a briefing about their choice of words for the impending radio session.

Dear John is even better than the opener. New(ish) boy Ron joins forces with Tim to provide some haunting vocals. Mark uses his little air-powered keyboard to great effect. It is clear from the songs and the mid song banter that the band are as tight as ever. The final song of this incredibly short set is the title track of the new album, Girl at the End of the World. Tim explains the meaning behind it - a particular death trap road where he resides in the States. Despite cries for more, time doesn't allow it. Job done though. Stripped back these new songs are mightily impressive and any doubters in the room must have been won over.

And so on to the BBC. James have an impressive record of BBC session recordings. First recording for the corporation way back in 1983, their sessions are always interesting. Recorded within a short timescale, the band had to produce several songs often in just a few hours. As such, we find the band at possibly their most natural and raw. There were never times allocated for overdubs and so on during their sessions. Tonight, they are recording in front of an audience, making it even more of an exciting prospect. The band deliver a semi-acoustic performance. Girl At The End Of The World is upbeat and vibrant despite its lyrical content. The audience - about two hundred people are crammed in - love it. A truly beautiful Just Like Fred Astaire follows surprisingly. 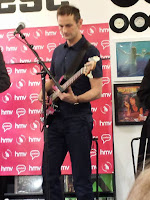 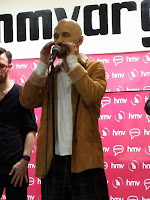 I was expecting a big new album promo push but in true James style, they pull out all the stops to deliver a classic curve ball set.  The audience love it. Tim then confesses they are going to do something James and something stupid and they attempt to cover Daddy’s Gone from a favourite Scottish band of Jim’s, the seminal Glasvegas. Jim always played Glasvegas albums before the band hit the stage on their tours of America. Tim reveals that the band have only spent twenty minutes rehearsing it and Saul jokes that they have always wanted to ruin a Glasvegas song. You can guess the rest. They pull it off in fine style and it would be a real shame if they don't release it. Dominated by Jim's bass, they make it their own and it is almost unrecognisable. Adrian stars on cello, Saul stars on violin and Ron maintains the beat. He is a welcome addition to the ranks.

An extensive interview follows where we learn about Tim’s dancing, the origins of the band name, Brian Eno (there's another song they are working on with him that wasn't ready for the album), the connection between Manchester and Glasgow, recording in Scotland and the possibility of the band playing experimental, improvised gigs in London, Glasgow and Manchester. We can't really put into words just how much we are looking forward to that prospect.

Getting Away With It follows with Adrian this time on his trusty Fender Jaguar. It is a slowed down, relaxed version, sounding as fresh as it did when debuted back in 2000. The ability of the band to make their old stuff sound as fresh and contemporary shouldn't be undermined.

Feet of Clay opens with a great raw, bouncing Glennie baseline competing with Adrian’s cello. Add in some stunning violin from Saul and the band have created something quite beautiful. Tim isn't happy with the result as he feels he has forgotten how it goes. As the band are recording for future broadcast then there is a welcome opportunity to hear Feet of Clay again. It already sounds like a classic. It maintains a gallop in the same vein as Sometimes and is a much welcome addition to the James catalogue.

Catapult has a subtle, slow, discrete opening. Tim is concerned as to how it will sound as they have never played it in such a style. He needn't have worried. It retains a charm and a groove. As it progresses, the song builds and builds like the very best of James songs. In the end, it sounds like Saul and Adrian are competing in the friendliest way possible on their respective guitars.

Tim reveals that Dear John will be a single at some stage but the more you listen to the new album, the more you can make a case for most of the tracks being singles. It bounces along with some great ensemble vocals from the assembled cast. Jim's bass for Dear John and, indeed for most of this evening, is almost played as a lead instrument.

Say Something is dominated by Adrian's cello and all the better for it. He has come off the sub's bench in the last year and he has delivered. Tonight’s semi-acoustic set up has allowed Adrian to shine. He switches effortlessly from cello to guitar and contributes to backing vocals too. His return has added an unexpected dimension to the band. He isn't really filling in for Larry Gott but stamping his own style all over tonight's proceedings.  He is my man of the match although it's as always a team game.

I came along tonight with some reservations about the band. My reservations were blown away by a country mile. The band demonstrated a passion, commitment, dedication and love for their craft tonight like I haven't seen for a long time. That's not to say that any of these qualities have been missing. It just seems like they have really upped their game.

Ending with Nothing But Love, it sounds as though it has been around for years. It has a simplicity and a familiarity to it. It already sounds like one of the best James songs ever. Mark’s keyboards sound fantastic and Tim's vocals are as passionate as I have ever heard.

Four thousand people applied for tickets tonight and only two hundred got in. This is one of the very best performances I've ever seen from them. This way of working, in a semi acoustic way, clearly works very well for them. They don't just churn out a formulaic set but instead constantly challenge themselves and the audience like only James can. They need to work like this again. And so, the great James at the BBC reputation continues.

Our review of the Manchester HMV set can be found here.

Our Nothing But Love Track Of The Day feature can be found here.