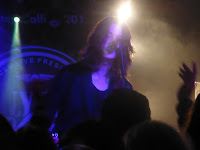 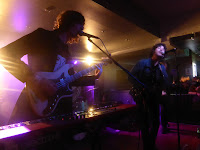 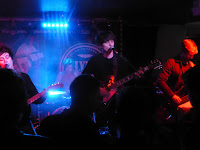 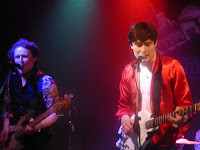 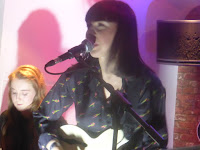 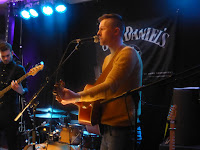 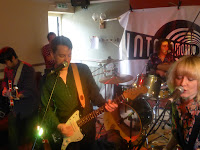 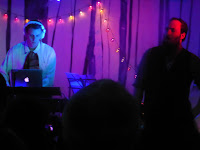 Stockton Calling is an annual festival held in venues around the town centre from the 1,000 capacity Arc to pub back rooms that hold less than 100. It gives the opportunity for local bands from the thriving Teesside scene to rub shoulders with nationally established bands such as Reverend And The Makers, Dutch Uncles and Blossoms – and all for a price you’d pay to watch one of those three headliners play on their own

The first act we see is the magnificently named Black Sheep Frederick Dickens, which turns out to an electronic side project of Goy Boy McIlroy’s David Saunders, a six foot six gentle giant of a man who spends most of the set amongst the packed audience in the Green Room, singing in our ears, posting A4 sheets with words like Death on them on the walls.

It’s hard to describe their sound but we’ll start with a Gothic version of the Pet Shop Boys and go from there. David’s voice is deep and powerful, whether it being letting go blood curdling shrieks or the quieter more reflective moments (during one of which he tells the audience off for chatting). They don’t seem to have songs, but movements that segue into each other and there’s a half-time break where he tells us we should all go and have a poo together in the venue’s one toilet before considering how we might do it. Utterly bizarre but a compellingly brilliant start to the day. 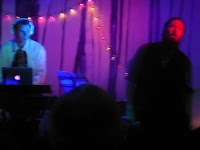 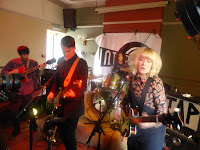 We hotfoot it across to The Sun Inn for The Tapestry, for whom the North East is almost a second home and the back room is absolutely packed to the rafters. There’s probably a certain affinity between their native Tameside and the part of the world we’re in, that rough but totally loveable personality that knows the world has dealt them a shit hand, but that grins and bears it.

They should be playing huge venues by now and their set demonstrates exactly why. What they do better than so many other bands is mix a wide range of influences – their run of should be classic singles We Talk, Infatuation, Rode Your Luck, Connectives, Look Out and new track Silhouette touch on so many bases. They’re pure pop at points, particularly when Zara and Katy’s vocals collide with Liam’s, but they’re also one of the hardest rocking bands around when the moment takes them. The North East seems to have fallen in love with them judging by the exultant reaction and rightly so.

We then venture to Storytellers for a set by Gateshead’s The Last Spectacular, a band that’s not afraid to wear their Americana influences on their sleeves. Clearly lovers of using vocal harmonies which they use to impressive effect throughout, they’re the perfect mid-afternoon come down for a day of running between venues. We fear for them when they reach for the banjo, which we’ll always associate with Mumford And Sons, but it’s only for one song and it actually works.  They mix tracks from their debut album A Hard Place To Fall with a series of new ones and it’s the latter that grab us more, always a good sign. 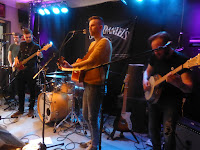 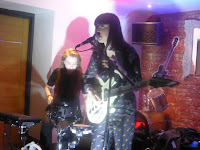 Next up for us is Natalie McCool in The Vault. It’s been a long time since we’ve last seen her and since then she’s added more electronic elements to her sound as well as picking up some pretty impressive fans and play at Radio 1 so we’re intrigued to see how she’s developed. Assisted by her friend Laura on electronic drums she runs through seven songs, a mix of recent singles Dig It Out, Pins and her new and best yet track Fortress.

She cleverly mixes live guitar and drums with use of backing tapes (which compensate for the fact this venue is unsuited to a full live band) to create an intoxicating blissful beat-driven set of songs that mark her out to be a force to be reckoned with, from the opening track Magnet through Cardiac Arrest and penultimate track Just Let Me Go. She appears to be far more confident and engaging than when we last saw her as well and with some justification as it’s a mightily impressive set.

Our local friends have recommended Avalanche Party to us and we turn up at the Georgian Theatre with no idea what they’re going to sound like. The North Yorkshire five-piece describe themselves as feral and there’s something animalistic in their performance. They don’t deal in niceties and aim straight for the jugular. Front man Jordan, red shirt open to the waist, stares into the distance for most of the set, a man completely lost in the moment and time as he and his bandmates create a huge sound that mixes both grunge and punk to great effect.

The end of the set sees Jordan piggyback on a willing audience member’s shoulders and come out into the unsuspecting crowd during the long drawn-out and definite set highlight that we think is called Stick Together, accidentally starting a fight that looks like it might bring things to a halt, but it’s calmed down to allow them to finish their set in dramatic style with a mental flipped-out refrain of their final song. They’re not quite our thing, but you can’t help but be impressed by the sheer energy of their performance. 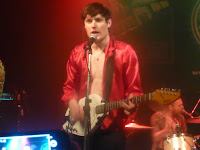 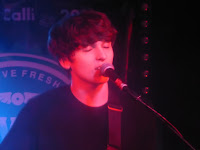 With the weather setting in and the risk of not being able to get into our venue of choice as the festival is sold out, we plump for Hull’s Fronteers next in Ku Bar and it’s an inspired choice. Looking unfeasibly young, they exude an infectious and immediate love of what they do, nodding to the classic sounds of their influences, but imbibing them with a freshness and a vitality that’s very much of the here and now. Recent single Idol is a killer song and you can feel them winning over the crowd as the set progresses.

Two new tracks – Street With No Name and I Hear It In The Rainfall – from an EP they’ve just finished recording are introduced towards the end of the set and it’s here that we see pointers to where they’re going.  Andy and James share vocals, at one point sharing the one mic, looking and sounding every bit the perfect four-piece alternative poster boys. They finish with Youth and we’re left with the impression that they’re just at the start of what could be a long and successful journey.

It’s great to see Hidden Charms back doing what they do best after the tragic death of their (and Viola Beach’s) manager Craig Tarry and they commemorate him with a loving animated picture of his head on their drum skin.  Their set, to a packed Ku Bar, contains both their singles to date Dreaming Of Another Girl and Love You Cause You’re There as well as the b-sides, but it’s the new material that they reveal in the middle of the set that has us most excited. Still with that raw feel that makes it feel like they’re jamming at points, the songs explore deeper into the ferocious grooves that are the centre point of their songs.

As ever. they interchange instruments and lead vocal responsibilities throughout their set which gets the crowd, which we suspect few of have heard of them before, going more as it progresses. It’s impossible not to be drawn in by the sheer joyful raucous energy that they impart through their music and the obvious love they have what they do. A little looser and harder edged and more of the street than many of their contemporaries, Hidden Charms are a band you’re going to be hearing a lot more of. 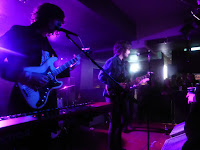 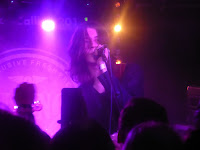 Ku Bar is a great venue, but with all respect, it’s way too small for Blossoms now and the audience is packed in like sardines after what seems an interminable wait for them to set up. It’s not just the size of crowd that want to see them either, tonight they bring arena-ready sound to one of the country’s finest small venues. It’s almost on the brink of distortion but the sound man holds it altogether, but what it proves is that Blossoms still have that ability to play it rough when they need to and it’s one of their fiercest sets we’ve seen for a long time.

The set already feels like a roll call of greatest hits even before they’ve reached their debut album – Cut Me And I’ll Bleed, At Most A Kiss, Smoke, Polka Dot Bones, Across The Moor, My Favourite Room, Blown Rose, Charlemagne and Blow – and the audience, very different in demographic to the young kids that made up most of the previous night’s Liverpool crowd, take a little while to warm up, but once they have they’re as captivated by the Blossoms magic as we all already have. As we stream out at the end, we think we’ll probably never see them again in a venue this size with this intimacy where we can see the whites of  their eyes – and that makes us sad and happy in equal measures.

We leave Stockton – as we did after the sadly departed Stockton Weekender four years ago – with a hugely positive impression of the place. It’s a town that’s been dealt a poor hand by the economic policies of successive governments, but rather than bemoan their luck, they’re celebrating a vibrant arts scene and a raft of great spaces in which to perform of which this festival is one of the annual highlights. Whilst the ticket price (£15) might attract some people more interested in beer and the craic than watching some amazing new bands in venues they’ll outgrow soon, that’s a minor quibble. Every town should have its own Stockton Calling and the music scene would be a much richer and diverse place.