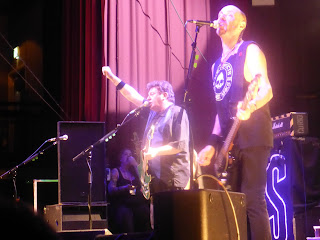 Stiff Little Fingers closed their UK tour with a triumphant show at Manchester's Ritz where 1,500 devotees both old and young lost themselves for an hour and a half in a world of hazy memories of the band's halcyon punk days. Whilst the energy that drove that movement at the time might have dissipated, the love for the music clearly hasn't.

Armed with possibly the biggest merchandising desk we've ever seen, Stiff Little Fingers are back in town at the end of a tour that's seen them record a DVD for future release at their Glasgow show and the Ritz is full of those for whom this is no ordinary band, but the one that changed their lives. Every single word is sung back with a ferocity rarely seen today and they've even got their own football terrace chant of "Fingers, Fingers."

We'll come clean, we weren't familiar with too much of their catalogue before the show, but we'll be out seeking it down. The set, as you'd expect, features mostly work from the 1977 - 1981 period before their first split, starting off with Wasted Life from their debut and finishing with their commentary on their troubled Belfast home in Alternative Ulster that brings the evening to a rousing, thrilling conclusion. 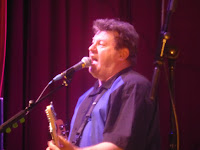 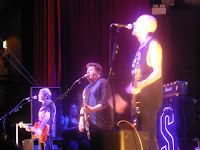 In between, the bulk of the set is made up of their second and third albums Nobody's Heroes and Go For It, although they do take time to honour the passing of John Bradbury of The Specials and perform their cover of Doesn't Make It Alright as well as an eloquent eulogy to Joe Strummer in Strummerville. They also lament the rise of celebrity and award culture before launching into a furious Guitar And Drum that spits with all the vitriol of the songs twenty years its senior around it in the set. It is of course the older songs that get the best reaction - Barbed Wire Love and Listen mid-set in particular and see the mosh pit fill pretty much the whole of the Ritz dance floor as Tin Soldiers and Suspect Device bring the set to a storming conclusion.

There's plenty of bands on the reunion / revival circuit, call it what you will, making a living they never got back in their time by simply turning up and playing, but Stiff Little Fingers mean it and, whilst age might diminish the physical, although bass player Ali doesn't stand still all night, they've remained true to that spirit that the majority of the sweat-soaked devotees channeled into almost forty years ago. These are great songs that mean the world to those singing every word back to them and they're being played by a band that means it. As Jake tells us before Gotta Getaway kicks off the encore he'd seen so many bands on You Tube cover it badly that they feel the need to come and "make sure it's done badly properly."