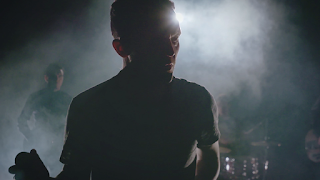 The Slow Readers Club have just been announced as support on the majority of dates on James' forthcoming UK tour. Regular readers of Even The Stars will know that we're massive fans of the band, but we delve a little further into their past to reveal more about them.

Before The Slow Readers Club there was Omerta. They formed in 2003 and signed to Manchester's hip Northern Ambition label in 2005 when they released three singles that sold out on the day of release and became collector's editions. Their double a-side debut Everything Is Frozen / Learn To Love The System was followed by One More Chance and their final single One More Minute. Despite having the world in front of them as the likes of Steve Lamacq championed them, the band dispersed around 2007. And that could have been that.

Not to be dissauded so easily, front man Aaron Starkie regrouped and formed The Slow Readers Club and they released their self-titled debut album at the tail end of 2011, featuring some of the best songs from the Omerta days, but also a trio of killer singles Feet On Fire, Sirens and Block Out The Sun.

The band was still going through a number of line up changes at this point and it wasn't until they settled on the current four-piece line-up of Aaron Starkie on vocals, Kurtis Starkie on guitar and backing vocals, Jim Ryan on bass and David Whitworth on drums that things really started to take shape. 2013 saw a one-off single Forever In Your Debt and a bolder, more strident confident sound that was made for radio. Hidden away on the b-side was Days Like This Will Break Your Heart, a song most bands would consider their best work. Slowly but surely that buzz about them that had been lost started to return as their live audience around Manchester started to grow as word spread about them aided with shows supporting the likes of Catfish And The Bottlemen. They introduced new songs to their set, each one feeling like a major triumph in its own right as they slowly but surely wrote the tracks that would make up their second album Cavalcade.

Ahead of the release of Cavalcade in April 2015, they released a string of singles - Start Again, Don't Mind and I Saw A Ghost - that saw them become favourites with the likes of Steve Lamacq and Chris Hawkins on 6 Music as well as Hattie Pearson on XFM. They were invited to play one of XFM's much-missed First Friday club nights at the Band On The Wall in Manchester as well as being filmed performing I Saw A Ghost acoustically in Manchester Central Library. A few months prior to that they'd become the first band to play the newly revamped library and their show was recorded for release as Live At The Library, a digital only album that captured a mix of songs from both albums and the band on top form, adding new life to those from the debut as well as revealing tracks from Cavalcade for the first time.

There was a growing buzz around their live shows as well. Around Manchester venue sizes were increasingly steadily and they were starting to gather a substantial following around the country and further afield in places such as Italy and Ireland. By the time Cavalcade was released in April 2015, they'd sold out Manchester Academy 3 weeks in advance, but that was just the start. After a summer of festival headline slots at Far Out Festival, Headlander and the Manchester Food And Drink Festival as well as well-received sets at the Isle Of Wight Festival and Sheffield's Tramlines topped off by a stunning you-had-to-be-there set in the tent at Ramsbottom Festival  that had people queuing to get in to get a glimpse of the most talked about band of the day, they sold out a triumphant show at Manchester's Gorilla to finish off the year as part of a successful national tour.

With Cavalcade claiming top spot in Even The Stars' albums of the year 2015 poll and another sold-out Manchester show on the horizon at St Philips Church followed by a bigger national tour and dates in Montpellier and Dublin, the scene was already set for them to continue their organic growth in 2016 as they write songs for their third album. Of all the bands we've championed, they are the one that are universally adored by the people we recommend them to. They recently stunned a sold-out Sound Control with an acoustic rendition of Bowie's Life On Mars at a tribute event just to confirm their versatility.

The James tour is a fitting reward for one of the hardest working bands we know of. As well as being a great band, they're also a fabulous set of lads who always have time for their fans whether it be at a show or online.

If you're going to the James shows in May that they're supporting, get down early because you'll be in for a real treat. And it's a real credit to James and their management that they're taking an unknown band that they've fallen for in the same way we have out on tour with them rather than some of the more obvious choices we've had in the past few years.