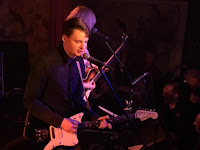 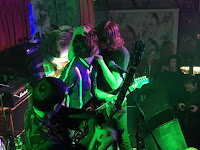 The Tapestry are old kids on the block now. One of those bands that seem to be permanently on the edge of making a breakthrough yet never quite making it, remaining one of Manchester's best kept secrets, selling out venues like the Deaf Insitute that nationally established bands leave half full. But we've never seen the place rock so hard for a band in the years we've been there and they have some new material to share with us. Support came from the insane Cabbage.

Cabbage are first up and the place is already full for them as the building hype around them in Manchester seems to be spreading. They're absolutely stark raving mad but, at the same time, absolutely brilliant and you can't take your eyes of them. Front man Lee starts with a Mark E Smith style rant before the band let loose and almost immediately you know we're onto something special. There's plenty of bands throwing the post-punk agenda around at the moment, but there's none this wild. Songs feel like they've been glued together from a million shards rather than having any structure to them, they talk in comedy accents between songs, declare themselves to be "absolutely bollocksed", paint each other in red lipstick and Lee almost gets thrown out mid-song by a bouncer trying to get back on stage after piling into the audience to mosh with the throbbing crowd.

In the chaos of everything that's going on, you could be forgiven for losing sight of the music, but that'd be a big mistake. There's a song called Necroflat In The Palace that has a chorus that declares unequivocally "I was born in the NHS, I wanna die in the NHS" and another called Dinner Lady about the impact of Tory austerity because Cabbage actually have something to impart. There's plenty of completely superfluous but weirdly appropriate swearing throughout and for all the chicaneering between sections of the songs, they never let up the fast and ferocious pace or ever feel out of control because they're accomplished in their playing. Lee and Joe swap or share vocals throughout in the way The Libertines do and there's an extraordinary chemistry between all of them that's essential to create their sound.

Cabbage are bonkers, people will either love them or despise them, but will never ignore them. They leave with the message "don't let anyone tell you what you to do, don't take any shit, if they do tell them to stop with that boring shit" before blasting through their debut single Kevin to finish their set off. 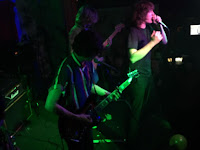 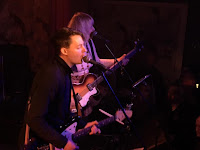 It's a tough act for The Tapestry to follow, but follow it they do. Going for the jugular with recent single We Talk as their opener, they deal in big pop-tinged anthems that wear their heart and influences on their sleeve and that translates through to their performance. There's a wonderful chemistry between the four of them and Liam has developed into an engaging front man whose infectious energy in his delivery contrasts from the hot-headed version of the band's earlier incarnation without losing his Tameside attitude. It's far from a one-man show though, the rhythm section is fast and furious and drives their big songs along and when Katy and Zara join forces with Liam on vocals, it gives the song a lift that so few of their contemporaries can live with and Dyna, in between random spoken outbursts, is an unpredictable guitar genius who loses himself to his surroundings.

Their set covers most of their best-loved singles of the past few years including their latest double-headed beast of Connectives and Catacombs, as well as a new one called Silhouette that shows they've still got the knack of crafting these huge anthemic sounding songs that would sound perfect filling the city's biggest halls - following in the footsteps of Look Out, Right As Rain, Infatuation and the set-closing Rode Your Luck, all of which are present and correct tonight. As the gig finishes, there's a mini-stage invasion, Liam loses his guitar and hurls himself into the adoring crowd whilst Katy throws herself into the drum kit and ends up lying on top of Zara.

You only have to look at the belated success that's being enjoyed by The Slow Readers Club to see that hard work, great live shows and, of course, a set of killer songs can eventually be rewarded even when you think their moment might have passed. The Tapestry tonight were as fresh, vital and ready to be universally adored than they've ever been even after having the substantial gauntlet handed down to them by Cabbage.

Email ThisBlogThis!Share to TwitterShare to FacebookShare to Pinterest
Labels: Cabbage, The Tapestry