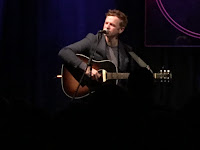 Tonight's event is a fundraiser for Gracie's Fund which was set up to support a young girl Gracie who is four years old and for the second time in her young life is battling AT/RT which is a rare type of brain tumour. It's brought Simon Aldred, aka Cherry Ghost, out of hiding to perform a one-off show accompanied by Christian Madden on keyboards with all monies raised going to the fund to support treatment and care.

The acoustic treatment means that the songs are missing many of the intricate arrangements of the recorded versions, but this in no way dims their impact. In fact, stripped back to the beautiful simplicity of just an acoustic guitar and keyboards allows them to shine even brighter, emphasizing the timeless nature of Aldred's songwriting. His songs are unmistakably his, but whilst they have a connecting theme, they never once sound like one of the others, a sign of his craft.

He's on good form too, joking when Christian tells him his guitar is out of tune after he takes an age tweaking it and starting Sacramento and telling us that the response to the first notes of one song made him think he was on Stars In Your Eyes. Mathematics, which he admits to being one of his own personal favourites, is a perfect example of what makes Cherry Ghost so special - the audience might not be the hippest young things on the planet, but it's one that appreciates the simple beauty of these meticulously melodic and disarmingly romantic songs. There's almost silent reverence throughout the two hundred or gathered disciples as he treats us to highlights from all three Cherry Ghost albums as well as the brilliantly ascerbic b-side Bad Crowd. 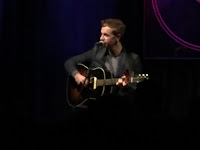 The songs are augmented by Christian's keyboards, high up in the mix throughout and with a slightly wonky charm that adds an edge to the songs and so much to the evening's events. There's a fabulous chemistry between the two of them, both musically and in between the songs.

Aldred's stoic modesty and refusal to play the game with his own music means that he'll never get the acclaim that this set of exquisitely crafted and perfectly delivered songs deserve. But to those of us in the know, Cherry Ghost are a unique treasure with a captivating catalogue of songs that it's impossible not to swoon at and fall in love with.

More about Gracie's fund can be found here.