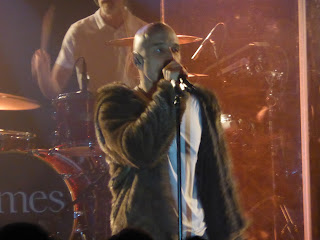 London Scala plays host to the second of James' intimate preview gigs for their forthcoming 14th album Girl At The End Of The World. A set brimming with ten tracks from the album and a few select nuggets from their back catalogue delighted a sweaty and packed venue.

"Welcome to the James cock up show" joked Tim as the band came on stage. As they started opening track Bitch, which also opens the album, things come to a grinding halt. "It's like that on the album, it's very avant-garde" he deadpans, before they restart and he loses himself in the simmering brooding beast of a song that ushers in what is probably their most diverse record of their career (if you discount Wah Wah). To My Surprise has had a bit of a marmite response from the James fanbase, but live it's looser and less regimented than the single with Andy drawing trumpet patterns over it and the great moment when the song takes off as Tim declares "I think I've finally cracked your code, I've hacked your system from within." Like Manchester the night before this crowd is attentive for the most part although Tim does later weave a shut the fuck up to the balcony talkers smoothly into a story about Talking Heads playing a set of new songs only at a festival.

Tim introduces Move Down South before Saul tells him they're playing Catapult next and there's a great moment between them that ends in laughter. James are at their best playing new material and their excitement with these songs is very real and palpable. Both Catapult and Move Down South that follows it are big live songs and the Scala's rather excellent sound allows them to shine. As they conclude the latter the music drops away save for a haunting violin from Saul and multiple voices join together for an accapella section that repeats the chorus over. 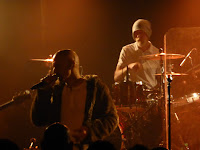 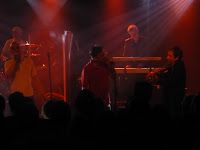 Tim reveals Dear John as the next single and tonight it feels like just that. Its electro underpinning marks it out as new territory for james and part of the dance grooves on the record that the band have excitedly talked about. However it still retains that earworm characteristic that runs in the DNA of James singles.

Top Of The World provides an intermission from the onslaught of listening challenges the audience has faced so far. It concludes its atmospheric seduction of us with a gorgeous violin solo from Saul. Feet Of Clay is cheerily introduced as a song about wanting to commit suicide. Tim, Ron and Andy's vocals combine to deliver delicious crisp harmonies. The gremlins come back at the start of Girl At The End Of The World but, such is the connection between band and audience, this is almost celebrated. Saul jokes that the capo is too high and Larry once played that trick on him on live television.

Even at this early stage in the life of these songs in the public arena they're being tweaked and twisted. You can hear Andy much higher in the mix than on the record and again Ron's contribution on backing vocals can't be underestimated. Surfer's Song is made for the dance floor, underpinned by a frantic searching beat that builds and builds and sees Tim lose himself in dance.

There's then a section of the more familiar, although it's headed up by the unlikely choice of Senorita, but it's a reminder of how great and under-rated the Pleased To Meet You album was. The response at the end tells its own story, but it pales into comparison with those that greet Waltzing Along and Say Something. Both come from the less obtuse side of James' catalogue, however they've both benefitted massively from a rest and a refresh. The latter has a part where Saul's violin and Andy's trumpet are duelling with Tim refereeing in the middle.

Interrogation is the first of two La Petite Mort which suggests they're not going to do what they often do and avoid the previous album on the next one's tour cycle. It's a fierce song as it builds menacingly before exploding into a wall of light and sound. Sadly and slightly disappointingly we only get the short version.

The final song of the main set is Attention and it is the album's real centrepiece. It's a song of two parts that shouldn't fit together, starting slowly and building, as so many of James' finest songs do. It drops down to Mark's keyboard in the middle and some stunning black and white light effects before exploding into a wild section to propel itself to the end. It's guaranteed to be a live and recorded favourite. 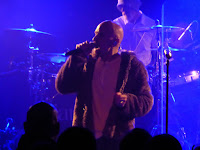 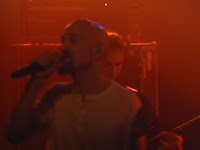 The encore starts with Moving On and its poignancy means it gets a similar reaction to the bigger hits in the middle of the set, and quite rightly so as the song, aided by that video, is the one that so far since the reunion has touched the most people. That might all be about to change with Nothing But Love. Live there's a glorious chaos to it as Adrian, Andy and Ron all contribute vocals which wrap themselves around Tim's. It sounds very different in that way to how it did the previous night.

They depart but there's no way Scala are letting them off that easily. They return and tell us they're going to play one of their few hopelessly romantic love songs. Saul jokes Stutter, but of course it's Just Like Fred Astaire, a popular choice. They're persuaded to stay on and after a brief conversation decide to play Nothing But Love again. There's a false start seconds after Tim jokes about messing it up. The second version shows how much they're flying by the seat of their pants as it sounds far from a carbon copy of the first as they're working and forming these songs in front of us.

All in all this was a stronger gig than Manchester. It was helped by a much better sound and light set up and the more intimate layout of Scala, but it mixed this with the confidence of a successful night behind them. Some of these songs will sound and look stunning in the bigger halls in May and some will be fan favourites by then after the album has hit the streets and there feels like there's a really strong chemistry glueing them together. The crowd fed off that and gave the set the respect it deserved amidst the excitement of the majority of most of them hearing the songs for the first time.

James played Bitch, To My Surprise, Catapult, Move Down South, Dear John, Top Of The World, Feet Of Clay, Girl At The End Of The World, Surfer's Song, Senorita, Waltzing Along, Say Something, Interrogation, Moving On, Nothing But Love, Just Like Fred Astaire and Nothing Buf Love.