Track Of The Day : Fossa - In The Cold Of The Night 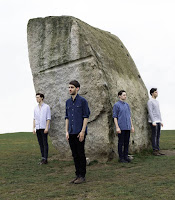 In The Cold Of The Night is the fourth song released in the last ten months by London's Fossa. It's a beautifully fragile emotional track which showcases vocalist Louis's expressive tones. It demonstrates their love of classic songwriting structures, but their ability to put their own take on it and create something that entrances the listener.

It's a little more subtle than their previous tracks, preferring the use of programmed strings to the electronic beat of their last reveal Silo, but is unmistakably them and it's good to see a band not afraid to vary their sound and doing it successfully whilst retaining their own identity.

Email ThisBlogThis!Share to TwitterShare to FacebookShare to Pinterest
Labels: Fossa