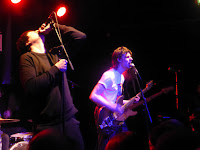 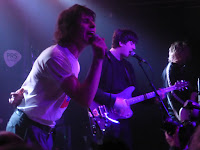 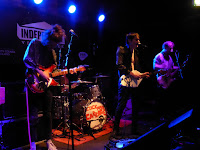 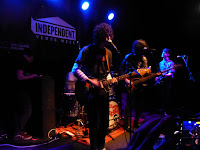 As part of Independent Venue Week, Cabbage headlined the latest of a series of gigs at our favourite independent venue, The Trades Club in Hebden Bridge in one of the last chances we're likely to get to see the most important new band in Britain in such intimate surroundings.  Support came from Avalanche Party and The Goa Express.

Avalanche Party describe themselves as feral and it's as good a description as any. Loud, brash and in your face, their set takes the direct approach of a whirlwind of loud guitars and loud vocals but without forgetting that such things are pointless if not married to a tune and they have those in abundance. The picks amongst an exciting set that grabs you and makes you listen to them are their two recent singles Porcelain and Solid Gold. They finish their set with Jordan in the crowd amongst us singing the last song whilst we gather around him and they leave behind a really positive impression. 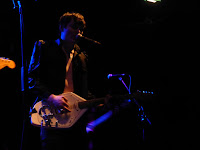 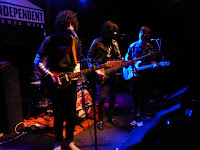 The Goa Express are a relatively new band, but you wouldn't know it from their performance or the response they get from those who witnessed their performance here last year opening for The Lucid Dream. It's our first exposure to them but we can immediately hear hints of The Stooges in their exhilarating mix of garage and psychedelic bluesy rock and roll that runs through their eight song set. Last year's debut single Reincarnation Of The Lizard Queen is a real stand out track as it the relatively new semi-eponymous track Goa, but promisingly they never let the standard drop and win over a now-packed room. 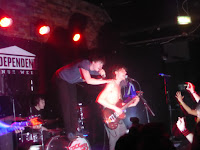 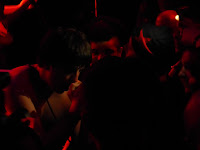 There's hardly space to move by the time Cabbage come on at ten, but that doesn't stop the moshpit that kicks in as they open with Dissonance and it feels like the Trades floor is in danger of giving way as it bounces along to the rhythm of two hundred sets of feet. There's little let up as you'd expect as they power their way through nine of the songs from their four EPs and a new song called Gibraltar.

What Cabbage are doing these days is dismissing the dissenters that could mark them down as some sort of art experiment. They may still sing about wanking in quiches and demanding death to the leader of the free world (although they've probably sensibly ditched Free Steven Avery from the set), but no one is addressing the social and economic mess we find ourselves in as they do in Uber Capitalist Death Trade and It's Grim Up North Korea or giving us a rallying cry for these austere times as forceful or uniting as "I was born in the NHS, I wanna die in the NHS" from the royal / celebrity baiting of Necroflat In The Palace. 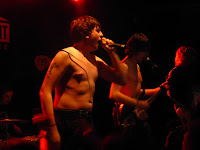 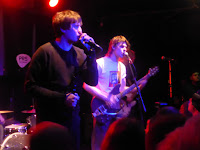 It's a little less chaotic tonight than some of the previous times we've seen them, no babies in shitty nappies or gimp masks and no hanging from a cage in an art installation and thankfully Lee's stopped wearing jogging bottoms that show us half his arse, but what that does is allow to us to focus on the fact that they've developed into a formidable live band to be reckoned with and possessing what now feels like an unstoppable momentum. Whilst the interchange between Lee and Jo, both who end up topless before we're half way through, is still central to everything they do, it allows us to recognise the contributions of Eioghan, Stephen and Asa.

In a Brexit world where the lunatics are taking over the asylum and the opposition is stuck decades in the past, Cabbage are perhaps the oddest, but in many ways the clearest, voice of dissent in their own inimitable way. One look around the room shows a crowd of all ages and both sexes joined together in the shared knowledge that we're watching, in their own perverse way, the most important band in the land at the moment.