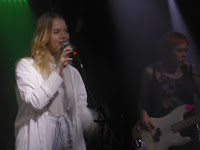 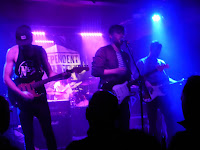 One of the most touted new bands around Dream Wife returned to Manchester to headline DIY's Hello 2017.  They more than lived up to the excited hysteria that's building around their live shows with a twelve song set from their debut EP and forthcoming album that took no prisoners yet was a whole load of fun with it. Support came from Manchester's Move.

Move are a relatively new band and their set is just six songs, but what they deliver is a beautiful melodic set of tunes that hang well together and which hold the listener's attention and they combine it with an energetic performance that adds to the impact of the songs that they play. They don't say much so we don't learn too much about them and what they're up to other than that they've got more where recent Soundcloud release You Don't Have To Try came from in their locker to charm us with in 2017. 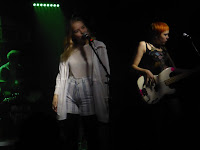 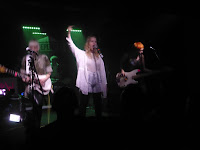 There's something magical about Dream Wife though. At points they're sugar sweet butter-wouldn't-melt, the next they're snarling, brooding and threatening to rip your head off and do untold damage to it. Opening track F.U.U. hides the threat of fucking the song's subject up in such a way that only hits the listener when you get to the chorus and it's too late to resist them even when they mash in part of Spice Girls' Wannabe into it. It's part of their magic though, they're not ashamed to be pop at times, but they've also got their feet planted in the camps of loud guitar music and sixties girl group harmonies at different points in the set without it ever feeling like they're trying too hard.  And it's impossible to shake the huge grin that Rakel has on her face as she bounces around stage, jumps on the monitors at the front and encourages the front rows to join in.

They play Kids and Lolita off their debut EP and finish the set with its lead track, the effervescent bubblegum pop meets grunge of Hey Heartbreaker as Rakel, Alice and Bella join together in the three pronged attack of the chorus. But in between those that the crowd know and love already, the songs they reveal from their recent writing and recording sessions show that there's no danger of their wave abating any time soon. Songs like Take It Back, Somebody and Act My Age has a mischievous streak of brilliance running through them, much in line with keeping with the way the band formed as a fake band for an arts performance. However, now they're deadly serious and they're impossible to ignore as they threaten to steal the show from every other band in town.