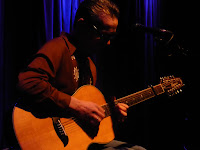 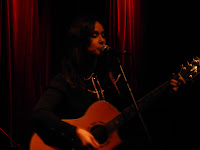 As part of Independent Venue Week, Richard Hawley played the first of two special acoustic nights accompanied only by his trusty guitarist Shez Sheridan and harmonica player Clive Mellor at Hebden Bridge Trades Club with support by Juanita Stein who is embarking on her debut album in the next few months.

"We've been touring the hell out of this country for about ten years" muses Juanita Stein half way through her set after playing one of her band's best known songs Broken Bones. It was always a mystery why they never found a wider audience and as Juanita prepares for the release of her debut solo album, it's hoped that the stripped down songs that she reveals tonight with just an acoustic guitar will allow her to get wider recognition.  The first song she's revealed Stargazer is an impressive marker, but the likes of Florence, Cry and the set-closing Cold Comfort are all beautifully crafted delicate songs with a sense of purpose which hold the audience's attention avoiding the usual chatter that accompanies support acts in these circumstances.  She makes a cover of Johnny Cash's A Thing Called Love feel like her own with a dark seductive take on it. The response she gets at the end of her set tells its own story as rapturous applause rings round a charmed packed Trades Club. 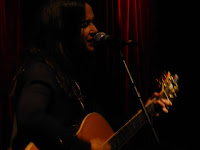 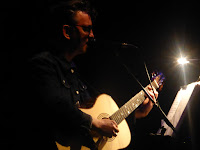 The crowd are equally as hushed and silent throughout Richard Hawley's set, other than to laugh at his repertoire of a mix of old and off the cuff jokes between songs, paying due reverence to one of the country's finest songwriters.  His fourteen song set is heavily based around the albums since 2009's Truelove's Gutter, from which four of the songs are taken - but with a catalogue as deep and rich as Hawley's it's difficult to cover all bases, but the receptive audience could have no complaints as the stripped-down approach and the expectant atmosphere accentuate each and every note and word of the songs. For the most part it's just Richard and Shez on guitars, their age old friendship and working relationship meaning that they're perfectly atuned to each other. For a couple of songs, they use a drum machine on Shez's phone and Richard invites long term collaborator and friend Clive Mellor to play harmonica, much to the delight of the crowd who engage in some good natured chanting of his name.

Truelove's Gutter marked a darker edge to Richard's songs but songs from before that era work equally well stripped down. Tonight The Streets Are Ours is perhaps one of his radio-friendly songs from Lady's Bridge, but loses none of its impact with just two guitars whilst Just Like The Rain, with Clive's majestic harmonica piercing the silence, is another reminder of the brilliance of Hawley's earlier work. 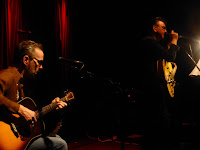 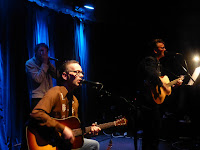 Mid-set Richard swaps his acoustic for an electric guitar and this adds a darker harder edge to the middle of the set and the claustrophobic intensity of For Your Lover Give Some Time, Remorse Code, Standing At The Sky's Edge and the most recent Nothing Like A Friend from his last album Hollow Meadows. The bleakness in many of those songs is multiplied by the setting they're being played in, but the absolute power of the music and its ability to hold two hundred people's attention is really something special and testament to the magical powers of the Trades Club as a venue.

Richard's on good form too, joking that For Your Lover was written for his wife "to get a shag" but got the response of "what's for tea?" while he recollects his last visit to Hebden Bridge to play The Picturehouse where there was no beer and everyone was drinking tea. Like his comrade in arms John Bramwell, alcohol is a feature in his between song chatter, the tale of how he first met Clive in the Castle Hotel in Manchester during a six hour drinking break between in-stores and a midnight radio session, joking that the town is twinned with Warsteiner (and a suicide pact with Brighouse). He also engages in some call and response banter with some of the crowd, enquiring of the age of a woman who declares her love for him. It's impossible not to warm to his gruff Northern humour that is often in contrast to the subject matter of his songs, but that's what draws so many to him, particularly in a town like Hebden Bridge with its stoic joie de vivre and wicked humour despite the regular flooding it receives.

As he finishes on a cover of Lee Hazelwood's Son Of A Gun, a song he says they've never played before, and the crowd pour out into the cold night air from a room full of the warmth of love that only the very best music can create, it felt like a genuine privilege to watch one of the country's finest and most underrated musical talents play a venue a tenth of the size of his usual haunts and to appreciate the intimacy and emotional power of the performance.

Richard Hawley played As The Dawn Breaks, Ashes On The Fire, Tonight The Streets Are Ours, The Sea Calls, Don't Stare At The Sun, Nothing Like A Friend, For Your Lover Give Some Time, Remorse Code, Standing At The Sky's Edge, Just Like The Rain, Lady Solitude, Long Time Down, What Love Means and Son Of A Gun.