The Nightingales - Become Not Becoming EP 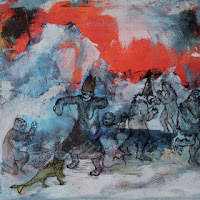 Become Not Becoming is the first new material from The Nightingales since 2015's Mind Of Matter and the six part EP continues in the rich vein that they mined on that record.

Whilst the line-up of the band has been relatively fluid recently, the core of The Nightingales in recent years has been the musical relationship between front man Robert Lloyd and drummer Fliss Kitson. Whereas the oft-compared The Fall descend into an extension of Mark E Smith's ego, the call and response vocals of the pair across most of this EP are central to the core energy that builds into the songs and explodes into life.

Opening track B Side At Best is a case in point, a continuation of Lloyd's disdain for the music business outside whose constraints they carelessly operate. Declaring "I see no difference, there is no difference" at the identikit bands that are dismissed with the half sung half barked "rock and roll, take the piss," Lloyd's disdain is spelled out loud and clear and when Kitson declares "I wanna sign you baby because you look good". The band meanwhile dart down many dark alleys, never standing still, the volte face changes of pace and direction ensuring that they never fall down the pitholes of the bands they're singing about.

Where Become Not Becoming succeeds as Mind Of Matter did is that the songs feel so natural, like a stream of conscious being laid down for the first time every time you listen to it. There are points where In and Too Posh Too Push are going to implode or be blown apart by the band and Lloyd pulling in many different directions at the same time, but it's exactly that which keeps them so enthralling and leaves the listener constantly on the edge, unable to reach for the off switch.

They don't hang around either, songs don't outstay their welcome, the EP clocking in at less than 20 minutes. The final song Drown packs more in its sub-two minutes than most bands manage in five or six from the moment Lloyd growls "the boy stood on the burning deck, his fate engulfed by fire" whilst The Divorce That Never Was just about represses its inner glam rock stomp as he declares "yeah baby i love you because I can't get away from you."

Become Not Becoming is the sound of a band that has no pretension of being cool, furrowing their own path oblivious to much of what else is going on around them. Lloyd's sharp observant humour and passive impassive delivery marries perfectly with Kitson's contrary yet somehow entirely complementary vocals and the whirlwind that the band create to deliver an EP that stands on its own as a beacon of the independent spirit that's burned throughout the band's long career.

They tour to support the EP at the following dates :