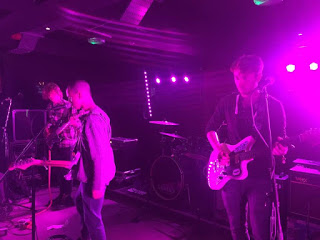 Faux Pas came highly recommended to us by a good friend in Sheffield so we ventured out to Dive NQ for the latest instalment of the CTRL Club night to catch their debut Manchester show and we weren't disappointed by an energetic set from a band early in their career but one that's already brimming with confidence and armed with a set of big bold anthemic songs that holds them in good stead for the future.

Their seven song set features all four tracks from their recent self-titled EP and starts with three of them - 1 In 3, You Can Own Me and Downtime. What's immediately evident is the ambition they've got in their sound, songs that build to an explosion in the chorus, rumbling grooves and strident drum beats that shout from the rooftops that they want to be heard by as many people as possible. Front man Reuben is assured, effervescent and his voice packs an almighty punch that grabs the audience by the throat and pulls them towards him and his band mates and people stop their conversations to move forward and listen to them because they're impossible to ignore. His band mates aren't content though to allow him to take all the glory, creating a gloriously uplifting sound for him to work with.

There's also a variety to their set as well, which is where some new bands fall down in trying to improve on their best song by writing different versions of it. Hindsight is probably the stand out song of their set whilst their final song Rebecca I'm Weak is another song that's destined to be a crowd pleaser as their star inevitably rises in the next few months as well as those songs from the debut continuing to do their work for them online. You sense from their demeanour that they know they're on to something potentially special here and they are already past that awkward shyness that bands often have in their early days and are engaging and know how to work the crowd. We're looking forward already to their next visit to Manchester.