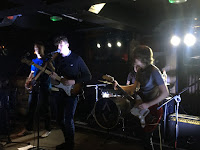 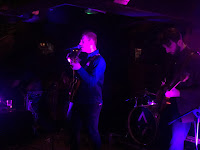 The latest in the series of CTRL club nights at Dive in Manchester's Northern Quarter saw one of our tips for 2017 Urban Theory team up with blog regulars Mayflower for a night of free music.

We've been excited about Urban Theory since witnessing one of their early gigs at Soup Kitchen last year which was their first gig with a new line up. They're only a dozen or so shows into their career as a band and it's often easy to forget that such is the self-assured confident nature with which they pull off songs like recent single Weekend Offender, Distress In The Ginnel, These Don't Get It Round Here and the ode to a summer holiday of abandon Fishbowls and Headfuckers. They've got that raw primal energy that anyone who saw Arctic Monkeys in their most formative period thrilled at. Things don't go all their own way though as they get fazed by a broken guitar twice in the set and an unhelpful heckler that should know better. The fact that this felt like a disappointment as they spent ten minutes fixing things up is testament to just how much we expect from them even this early on - and it'll be a chastening experience that we're sure they'll learn from. Whilst Carnival Club are more polished already, this rough diamond might be the one that becomes the shiniest and most valuable in the long term. 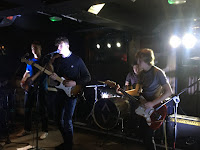 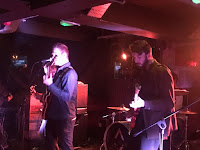 Mayflower's approach is an altogether different one; of all the bands on the local circuit at the moment, they're perhaps the most melodic. They don't aim to bowl you over with power, to shock you with their lyrical content or pull off any showman moves but they aim to melt your heart with big soaring anthems like their previous singles Sienna, I'm Not There and Rapa Nui. These are songs you can imagine thousands waving lighters to at the end of a hit-packed set in some alternative universe. However, they start with a new song, so new that it's still untitled, that's got the potential to take them up another level again. Olly's vocals sound richer and deeper than ever as they look to build on the growing momentum they've got, and when the harmonies kick in the songs feel like they're lifting the listener up and carrying us away and reminding us that all the show in the world is pretty meaningless if you don't have the tunes to back it up and Mayflower have those in abundance.