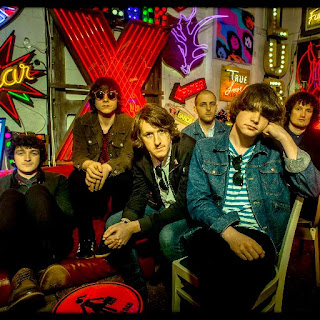 Neon Waltz are back after what seemed like a quiet 2016 for a band that was on the lips of many music lovers as we went into the year. They're about to embark on a three-week UK tour including a show at Manchester's Night And Day so we had a word with them to discover just what they'd been up to and to get exciting news about their plans for 2017.

2016 was a quiet year for you in the public eye. What have you been up to?

2016 was actually probably our most important year, because we finished our album. Everything else kind of took a back seat to having an album that we were all proud of and loved.

You released Dreamers and I Fall Asleep just before Christmas.  Could you tell us a little bit about those songs please?

Dreamers has been with us from an early stage with the band, and is probably one of the first songs we wrote together. We recorded it last year, and has been drastically re-shaped from its early incarnation a few years ago.

I Fall Asleep is a lot newer, and in all honesty we never really intended to release that version. We recorded that song in our croft (where we practice), and it sounded absolutely perfect to us, so we went and shot a video and released it.

You mentioned an album, is that due for release soon?

Absolutely, it’s taken us a long time but we’re perfectionists, and care a great deal about our art. It will be out later in the year, not sure on exactly when but definitely this year. And its amazing.

Are you still based up in John O'Groats? Is that likely to change this year as you get out on the road more and the band gets more successful?

We’re still based in and around John O’Groats, yes.

For the moment this is what works best for us, and what feels like home, but who knows. A lot of things could change, where we feel more suited to be somewhere else. Time will tell.

You're playing the Night and Day on the 20th, your first Manchester show in a while.  What are your memories of playing in the city?

Our first gig in Manchester was in 2014 I think, in Gorilla. It was really cool because the place was packed and we had Black Rivers supporting us too. Touring was all very new to us at the time so I will always have great memories of that gig.

We’re all fans of Doves so it was cool to have them on the bill. Bill Ryder-Jones also joined us on stage to play a cover of ‘Something Like You’ by Mick Head and The Strands. I'm sure there's a video of it kicking about on youtube somewhere, although it may be from the Liverpool gig the night after.

For our album to reach as many of the good guys as possible, to tour like crazy, to start piecing together the 2nd album, and to keep enjoying my life with my best mates.