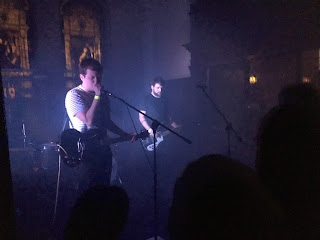 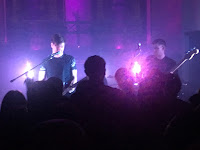 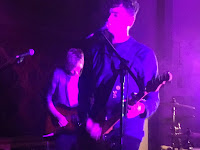 The holy surroundings of Salford's beautiful Sacred Trinity Church played host to possibly the most unholy trinity ever to darken its doors on Friday night as Ist Ist brought their steamrollering, all guns blazing live show to a sold out crowd with wing men Sly Antics and Jekyll preparing the ground for the onslaught.

Jekyll have been around for a few years now, the Blackpool four-piece steadily building a following with ever more impressive and powerful live shows and that momentum shows no sign of abating on the basis of their opening slot. With new guitarist Mike making his live debut and a set of new songs that show a significant progression from their last EP Wounds, their ambitious widescreen approach is starting to pay dividends and the church setting feels like the perfect place for it. Front man Joel has grown into the role, confident vocally and assured in his movements around the stage, and we expect a lot more from them in 2017 as they release these new songs. 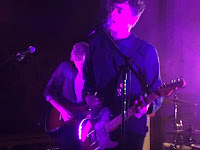 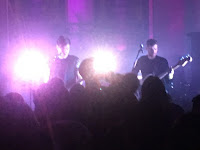 Sly Antics have brought a fair crowd down and treat this like their own headline show. They're what you would call a proper rock and roll band, huge soaring choruses, big guitar riffs and the rock star posing and posturing that goes with it, but they pull this all off with aplomb. It's not really our sort of thing, but there's no disputing they absolutely nail it and the response they get is undeniable. The title track from their recent EP Captive City is probably the stand out track of their set and as one of them ends up inappropriately in the pulpit in a blaze of light and smoke, their adoring audience lose themselves in a mass of heaving bodies.

A rumbling intro tape stops dead and a metallic drum beat kicks in and then Ist Ist launch us into a non-stop hour of the most intense violent yet strangely melodic music you've ever going to hear with the church's acoustics and a brutal light show emphasizing the effect.  Opening track Things Will Never Be The Same has one line repeated throughout, sometimes sung, sometimes screamed like a man possessed, a mantra that's quite apposite in these weird and not very wonderful times that we're living in, the repetitive drum beat and wild blasts of guitar and bass feel like they're calling down the apocalypse. Brutalize and Love Song are two of the oldest songs in the set, but they feel a world away from when they were first revealed to us, the former ending in Adam letting rip a huge guttural roar that echoes around the chapel, whilst the "when the night draws the only one I see is you" line of the latter wrapped around the foreboding tune it sits upon makes it the most unlikely yet affecting serenade you're ever going to hear.

1-2-1, like the opener, is a song that's not packed with words, but it doesn't need any. There's a hook so huge in it that you could imagine it filling cavernous halls rather than churches and thousands throwing themselves around to it. Too many great bands fail to make the transition from small venue to bigger rooms because of projection - like The Slow Readers Club, Ist Ist should have no such issues, at times it feels they're going to blow the windows out of here and submit Salford to their majestic beautiful chaos.  They change tack for a new song Preachers Warning, ditching the guitars for another drum and some electronic wizardry. It's doom-laden, brooding, claustrophobic, the sort of thing people would be filling buckets with if Radiohead came out with something as mesmerising and intoxicating. 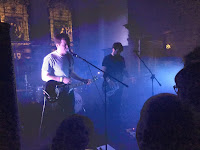 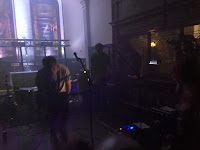 Rats is pure unadultered bedlam, two minutes of cataclysmic firestorm, one of those songs that it's impossible not to get swept away on the tsunami of energy that the three of them create with such minimal methods to maximum effect. It has to be a single at some point, by the end people are shouting them to play it again. Herein lies Ist Ist's problem though - conventional industry wisdom says they're too far out there to appeal, when the reality is that music this good just needs to be heard and people will love it. It's got kilowatts more passion flowing through it than bands that are selling out places like the Albert Hall with identikit formulaic "bangers". Hopefully the left-field success of Cabbage will knock down those walls and let Ist Ist in.

Recent singles Night's Arm and Silence follow. Much more structured but even more emphatic and powerful in their approach and dynamic they feel like a natural progression for the band, still astonishing us that there's just the three of them there making this sound that switches from sparse and intricate to blowing your head off at will. Emily, dedicated to Adam's future wife, has a similar effect and new song Strangers does something that you wouldn't expect from Ist Ist - the chorus "what are you doing here, these people aren't your friends" sticks in your head first time so much that people are singing it back by the second and third time it comes in. That they manage to do this without compromising what they're doing is pretty astonishing.

They finish the main set with White Swan, another recent single and another where the live version simply blows away the recorded version, an age-old problem for bands with a phenomenal live show. Its driving opening makes you want to dance, throw your arms in the air and let go of all your inhibitions like all great loud music should but often doesn't. As it finishes they dive into Nirvana's Territorial Pissings to complete the main set and deliver a cover version that doesn't pale next to its original.  There's no way we're letting them go though, even if the lights have gone up, and they come back, strap guitars on and leave us with a gloriously messy Left For Dead, the song that first sprung out of our computer speakers randomly just two years ago.

There's an amusing bit of graffiti on the wall of Aatma's gents toilets that simply declares "Ist Ist are better than you." Tonight that sharpie scribble feels like the wisest gospel of them all.