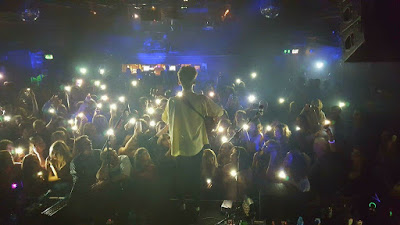 "Thank you Manchester for the greatest night of our lives" is how Larkins sign off their triumphant sold-out biggest gig headline to date at Gorilla. The deafening roar they get back tells its own story - of a local band that's making things happen for themselves and hitting the mark every time they step up a level.

Of all the young bands hoping to break through on the Manchester scene at the moment, Larkins are the one that appear best placed to do it. This gig sold out weeks in advance and feels like a natural progression from their raucous Club Academy show last year. With new single Wasted Years to add to a growing collection of diverse radio-friendly and instantly memorable songs they've released over the last two years, there's no real surprise that this is where Larkins find themselves three years into their life as a band.  When we first caught them as a fledgling young nervous group of mates at Whiskey Jar at the tail end of 2014 the potential was there but more recently it's blossomed quite spectacularly.

Where Larkins stand out from their contemporaries is their refusal to rely solely on "bangers" in order to "smash it" so rather than have a set laced with songs that all sound like variants on others, there's a real freshness and richness to the set that widens their appeal. They have their moments of course where they let loose and the crowd respond with pints being thrown in the end and friends climbing on the shoulders of others, no less so when they cover Chaka Khan's Ain't Nobody (Loves Me Better) mid-set after having slowed things down with Riverbed and Blind. 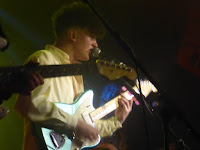 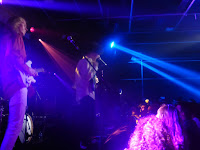 The singles naturally get the best responses as Larkins are still acquiring new fans with each release and big show. They start with Velvet, a real calling card that sets their stall out and finish their main set with Cassandra, Hit And Run and Wasted Years.  The encore is something special though, Josh comes out on his own and starts Sapphire completely unplugged with several hundred mobile phones lighting the room before Dom, Joe and Henry come out and plug in and it becomes an unquestionably triumphant swan song and a sign that they're ready for even bigger stages than this one.

They get the level of showmanship just right too. There's a dramatic entrance from Josh as his band mates are already on stage building a big introduction for him and throughout he's on excellent form, taking to these bigger stages like a fish to water, more confident and assured with each show. They are an exceptionally polished and tight live band now without compromising any of the urgency and thrills that are inherent in their music. Tied to a quite stunning light show that we've come to expect from the Scruff Of The Neck stable that have accompanied Larkins on this journey, this feels like a big band playing an intimate show.  It feels like they didn't quite believe what was happening to them; more nights like this and they're going to have to get used to it.