Track Of The Day : Stillia - Let Me In 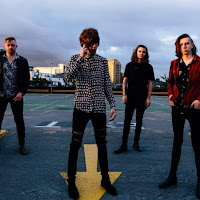 St Helens four-piece Stillia have just released their debut single Let Me In after selling out its launch night at Manchester's newest venue Jimmy's in just a few days. They've teamed up with Jonny Vegas who has directed their forthcoming video for the song too.

The song itself is one of the highlights of their live set, a driving drumbeat and delicious earworm vocal harmonies ushering in Jack's lead vocal in the verse before the soaring chorus kicks in. It's got all the hallmarks of classic crossover pop singles and is a very strong first single from a band whose live performances are making them quite a name on the North West scene at the moment.

Email ThisBlogThis!Share to TwitterShare to FacebookShare to Pinterest
Labels: Stillia