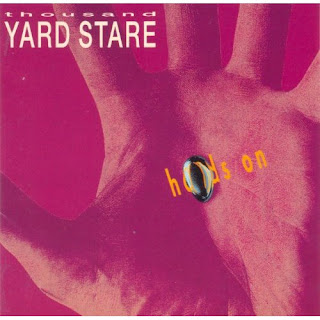 Back in 2015, there was much excitement at Even The Stars as we discovered a band we loved when we were young had regrouped for a one off show. The band were held in such esteem that we clocked up over 1000 miles between us to go and see them. We were blown away by them as musically they hadn't aged in the slightest. Drawing heavily from their debut album Hands On, Thousand Yard Stare were themselves overwhelmed by the adulation of the packed,sweaty Borderline crowd that they continued their adventure, recording a new album and subsequently touring the country to great acclaim,winning over new fans in the process. Today incredibly marks 25 years since Hands On was released.

Thousand Yard Stare hold a unique place in my heart, for they were the first band that I read about and was impressed enough to subsequently seek out their records. After a couple of demo tapes circulated locally, they came to the attention of NME new band writer Steve Lamacq and early 90s alternative radio champion Gary Crowley via their debut EP, Weather Watching.  The epic lead track Wondermint drew them much praise from journalists, fans, other bands and won them support slots with popular indie pop bands such as The Sandkings, Five Thirty and The Frank and Walters. Most significantly, they toured all over the UK, playing to big, packed houses with James, a band with whom they drew comparisons. Tim Booth personally invited them to support James on the autumn 1991 tour after catching one of their festival shows earlier in the year. In interviews of the time, he would often cite them.

By the time Hands On appeared, Thousand Yard Stare had released no fewer than four EPs and perfected the art of the classic pop single. Opening with one of the best football songs ever,  0-0 a.e.t. (No Score After Extra Time) was one of the finest nuggets in the Thousand Yard Stare canon, beautifully showcasing their love of pop, melody and the lyrical prowess of apple munching frontman Stephen Barnes. A blistering floor filler, it benefited from added strings provided by Martin Bell of friends/fans/influences The Wonder Stuff. In 2016, it was one of the set highlights.

It wasn't just quirky pop singles that they were masters at, as demonstrated on the six minute Comeuppance. Sounding almost like a jam, Comeuppance was dominated by Sean McDonough's driving bass, allowing guitarists Giles Duffy and Kevin Moxon to riff and improvise their way through. Whilst Cottager, Nonplussed and Buttermouth showcased the pop side of the band, Hands On showcased a band prepared to take risks and move away from the formula like so many other bands had subscribed to before and since. Take the second side opener Junketing as a prime example - not many bands were throwing delightful instrumental tracks into the mix. It was another of those experimental tracks which they seemed to do so well, far removed from their epics like Wideshire and the majestic Seasonstream.

It is hard to believe that Hands On is celebrating its 25th anniversary. In 2017, it still holds up as a classic album. Superbly produced by The Smiths' sometime engineer & producer Stephen Street, it hasn't dated in the slightest. Thousand Yard Stare, we salute you.

We interviewed them here ahead of their Borderline show in 2015 and reviewed their Live At Electric Studios album last year that featured re-recordings of tracks from Hands On, its successor Mappamundi and some new songs.