EP REVIEW - What Would Rory Wynne Do? 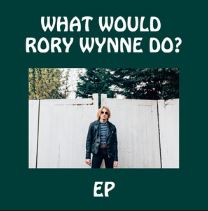 Strutting with teenage rock and roll arrogance and self-confidence of the musical equivalent of Zlatan Ibrahimovic, Rory Wynne surprisingly dropped his new EP last Friday. Entitled What Would Rory Wynne Do, his first proper release for over a year is a statement of intent, a statement of a young man who's aiming for the very top and sees no reason why he shouldn't get there. All four songs are strong enough to be lead tracks in their own right, but each different in their own right following in the footsteps of fellow Stopfordians Blossoms who rediscovered the art of the EP.

Star In The Sky is the opening track and the one that's seemingly glued to radio playlists and with good reason. Whilst Rory's first few self-released singles, and it's interesting to note that 2016 was spent writing and honing his craft, were raw, powerful and spiky, he's managed the neat trick here of retaining the teenage angst of the likes of Post Party Confusion and Why Don't You, but channeling it through something fuller sounding, perfect for radio and sure to win the hearts of both his peers and those of us a little older alike. With a sprinkling of glam rock stomp running through it, courtesy of the Skeleton Key magic dust that seems to turn everything to gold these days, and a lyric that immediately embeds itself in your head, both through its brilliant simplicity and its boy meets girl story - the chorus line "you don't know how good you are, you don't realise you're a star in the sky" being a case in point. It's a song you'll never tire of hearing, it feels absolutely timeless and effortless in its execution.

Tell Me Now continues on the boy / girl theme and displays a rare vulnerability in its lyric, but one even the most cocksure young man can probably relate to when they meet someone who might actually be the one - "I want to take you out on a Friday afternoon when there is nothing to do, but I don't know how to ask you." It builds to a big triumphant chorus, feels crafted to maximum effect but without losing its totally natural feeling as well, which is no mean trick. In The Dark is a little harder in its approach, a slowly accelerating guitar through the verses, keeping stylistically in touch with the rest of the EP but making its own mark at the same time. Lyrically a theme develops through the EP, as Rory again touches on the theme of a long-distance relationship - "are you aware what you're doing to me, my faraway queen."

The best is saved till last though. After Me is a three minute adrenalin rush that's closest to his early work in style as it picks over the latter stages of the long distance relationship after six months and it contains the genius line "you are the second greatest thing in the universe after me" and a lift into the chorus that sure to send the hordes of fans and new converts on the upcoming Blossoms / Cabbage tour into a frenzy when it kicks in.

What Would Rory Wynne Do? was a surprise release when it was dropped on Friday, but even more astonishing is the massive step up the four songs are from his previous releases which marked out his potential and led us to have him in our Tips For 2016 list over a year ago. This already feels like the real deal now even though it's likely to be just the opening shot in his ascent into the hearts and minds of the nation. When he tweeted his best wishes to Blossoms at the Brits last week, we responded that it'd be him in two years. That was before we heard this record; more of this and we might have to reconsider even that timeline and Stockport Council their road signs. Even the mighty Zlatan himself would be impressed.