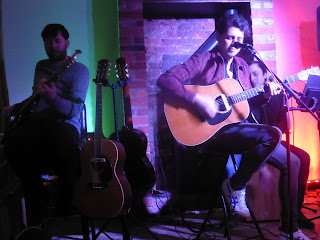 For a quiet Sunday night's entertainment we headed out to the Cheshire suburbs for a night with Dave Fidler at Poynton's Acoustic Lounge, a beautifully set up venue to cater for the music lovers out of town. Supported by brothers Rob on bass and Andy on cajon drum box, he played three sets of songs from his debut solo album I'm Not Here as well as a series of songs from the follow-up that he's in the process of recording and some covers to sate those in the audience that wanted to hear something they knew.

The addition of Rob and Andy gave an interesting twist to the songs from I'm Not Here, an album that was recorded solo and for the most part has been performed that way as Dave has teamed up with John Bramwell of I Am Kloot on a seemingly never-ending tour of the UK and Europe. As Dave is focusing on the recording of the second album, the versions he plays of songs from this record feel a little looser, richer and warmer than they had previously, the simple bass or the beat of the drum fleshing them out. Whether it's the protective father of A Song For Nico, the birth and death of Easy Gone, Easy Come or the lesser-played Reassured and The Raise, it's easy to be drawn in and disarmed by Dave's honest open charm and his understated yet astonishing prowess with the guitar.

The new songs augur well for the second album too. Love Listens is probably his finest piece to date, never over-complicating its message of "money talks, but love listens" but delivered with a deadeye accuracy that aims for the heartstrings. He plays two versions of a song he says is called Maria about a woman he met in Haiti who got caught in a drugs stings and asks us which one we prefer. He's resurrecting an old Bluebird Kid Clark song (his old band) called Go To Sleep as well which deserves a much wider audience, a plaintive love song from late at night. Can't Stand It is dedicated to one of Andy's failed relationships and is one of those songs that feels immediately recognisible whilst having its own personality whilst Home To Me, like much of the first album, is an intensely personal song about his family, but one which people can relate to from their own experiences, something Dave has had happen to him regularly as he's toured.

There's also a series of covers interspersed in the set and then which bring up the end of the evening once they've worked through all of Dave's songs. Their cover of Prince's Kiss is quite special, retaining the groove of the original with the limited tools they have at their disposal and Dave's guitar mastery very clear for all to hear. The final set sees them step back in time a little bit more and cover Bob Marley's One Love, Chuck Berry's Go Johnny Go, Hit The Road Jack and Creedence Clearwater Revival's Proud Mary. All are a telling pointer to where Dave's influences lie and you can hear those in his own songs that he'd performed earlier.

The night whet our appetite for Dave's second album and reminded us just how beautiful his debut had been. It also showed us that, despite our first reservations about the evening, that there is a music scene alive out in the suburban towns around Manchester, even on a Sunday evening, where people can go and appreciate great music in an intimate environment. The Acoustic Lounge is a real jewel in Poynton's crown.