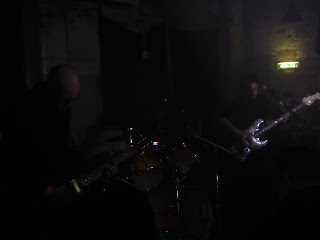 Esben And The Witch returned to Manchester last night for a sold out show at Soup Kitchen in support of their album Older Terrors that was released at the back end of 2016. Four records in, they're still as dark and enthralling as ever, refusing to play by convention and creating pieces of music that often defy the definition of song.

Older Terrors clocks in at over forty five minutes for just four tracks and that fact alone paints a picture for those unfamiliar with the live experience. Each song, if you call it that, is a journey in its own right, one moment intricate delicate and almost not there, the next a cacophony, a wall of sound that threatens to deafen anyone too close to the speakers. Yet it's done with absolute control of the effect it has on the listener, even more so live than on record. There's no big shows either, Rachel, Daniel and Thomas are intensely focused on their delivery, not side-tracked by our presence or even some chatter from the guys at the bar when they drop down to the quieter moments. 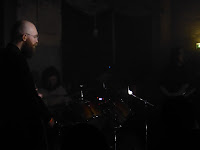 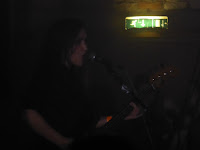 Sylvan, Making The Heart Of The Serpent and The Wolf's Sun form three quarters of Older Terrors and make up a formidable part of the set.  The magic of Esben And The Witch is how they take us on a journey of discovery down musical side-streets and back alleys yet provide the light to guide us through (unlike the stage which is barely lit to create maximum effect). Their set-closing The Jungle from previous album A New Nature and a brand new track called called Dumb Regrets have the same effect yet take us down more unmarked roads and blind curves to our destination. There's no bowing to commercial pressures here at all, it's their own personal musical journey that we're invited in to observe and to soak in. By the end we're exhilarated and exhausted.

Email ThisBlogThis!Share to TwitterShare to FacebookShare to Pinterest
Labels: Esben And The Witch