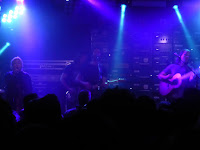 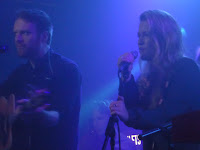 The Head And The Heart returned to Manchester in support of their album Signs Of Light that came out at the back end of last year and delighted a packed Manchester crowd with songs from that album and their self-titled 2011 debut and 2013's Let's Be Still as well as a Tom Petty cover. Support came from Teesside's fellow six-piece Cattle & Cane who are readying the release of their second album Mirrors.

Cattle & Cane are one of the country's most underrated bands. Their debut album Home went under the radar as they spent a number of years building a dedicated live following, particularly in their native North East. It's not difficult to see why either - their songs are built around the vocal talents of siblings Helen and Joseph who alternate on lead between songs as well as providing harmonies to the other. The highlights of the set are recent single 7 Hours and Skies, the opening track from Home. The great thing about them is their versatility though, at points they've got soulful funk tinges to them as the six of them create something addictively toe-tapping and then at others they've got the mastery of lower registers and slower songs that allow the emotions in their contrasting voices to really emphasize the lyrics of the songs and make a connection with the audience that they win over. 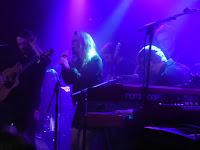 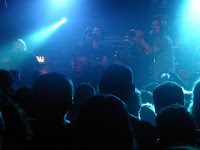 The Head And The Heart have no such issues winning over the audience although it's a fairly subdued start as the first half of the set focuses quite heavily on the new record rather than the likes of Lost In My Mind, Down In The Valley and the set-closing Rivers And Roads that they leave to the end where everyone is singing along with hands raised clapping. What that hushed reaction does though is allow the listener to focus on the quality of what they're doing, how they merge Jonathan, Josiah and Charity's vocals into something quite intoxicating.

Add into that mix the controlled chaos of six instruments coming together, the violin dancing and entwining with the keys as the songs swoop and dive through their different sections, lifting us, dropping us down and then taking us back up to the conclusion. There's a real joy eminating from the stage too, no false moves, no going through the motions, you can see them feeding off each other, building an energy and momentum that it's hard to ignore and not get caught up in.

Signs Of Light is heavily represented in the set and rightly so. Whilst it doesn't get the loudest cheers, the likes of City Of Angels, Rhythm And Blues, Take A Walk and the part-solo Oh My Dear are for us some of the highlights of the set, the sound of a band with their creative juices flowing, a real synergy at work and the sum of the parts creating something more than just that. Vocal harmonies in particular are used to spectacular effect throughout, no more so as the instrumentation drops away at the end of Rivers And Roads and it's just three of them singing acapella with the crowd joining in. The roar at the end of the main set and after the encore that includes a cover of Tom Petty's You Got Lucky, tells its own story.

The Head And The Heart's official site can be found here. They are also on Facebook and Twitter.

Email ThisBlogThis!Share to TwitterShare to FacebookShare to Pinterest
Labels: Cattle & Cane, The Head And The Heart