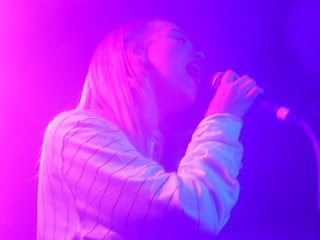 Less a month after their triumphant Night And Day headliner, Dream Wife returned to Manchester to Gorilla to support Sleigh Bells. An eight song set confirmed that they're one of the most exciting new bands around.

There's something quiet brilliant about a song that incorporate Spice Girls and nursery rhyme into a song whose chorus threatens to "fuck you up, cut you up" but that's exactly what opening track FUU does. As Rakel, Alice and Bella join voices to declare themselves "bad bitches" at the end, the logo of one of their t-shirts, you know this is no ordinary band.

The likes of Act Your Age, Somebody and Let's Make Out merely confirm that first impression. Abrasive jagged rhythms, a persistent insistent assault on the ears that suddenly dips into something sugar-coated and then just rips your head off again. There's a juxtaposition to Rakel's never ending grin and the attitude-rich words that are streaming out of her mouth that make Dream Wife such a compelling proposition. They're tight but not polished in the sense that there's a rough raw energy coursing through their whole set that makes them absolutely thrilling. 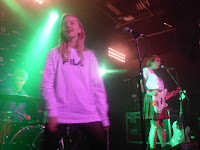 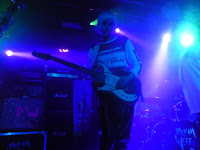 They finish with the stunning Hey Heartbreaker, a simply astonishing whirlwind of pop punk crossover, somehow stitching together three part harmonies with razor sharp guitars and a ferociously playful chorus all delivered as if this is the most fun thing in the world. You sense they win over an initially passive crowd as the set progresses judging by the response they get.

Dream Wife are the real deal. This is proper proper music that's not trying to be something it's not. It's full of passion and guts and a fearless uncompromising attitude wrapped up in a sharp sense of mischievious fun and delivered with a smile that makes everyone in the room do likewise.