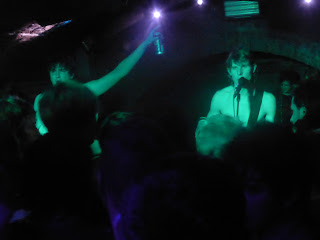 On the day tickets for their headline show at The Ritz went on sale, Cabbage made the short journey up the East Lancs to play in a much more intimate venue in the basement of Liverpool's EBGB's, a venue ill-suited to the furore and chaos of their live set these days.

After The Shimmer Band deliver a set where it's difficult to actually hear what they're singing such is the unsuitability of the venue for live music at this volume - a narrow ten foot high archway with no raised stage and sound bouncing off the brick clad wall. We fear for what might happen when Cabbage come on given there's only the flimsiest of barriers between them and the surging crowd. This means they have to stop a couple of times to ask people to move back to avoid those at the front getting hurt and thrown across the band's equipment. Whilst the sound does improve for them, it's a far cry from the venues they're going to be playing in the next few months, but in some respects we'll be sad to see the back of these wild, unpredictable, on the verge of collapse shows.

In spite and possibly because of this, Cabbage's performance is quite breathtaking. The front half of the crowd don't stop bounding from the opening bars of Dissonance whilst the studied bearded bespectacled onlookers at the back stop their conversations and watch the crowd throwing themselves around and affording them the odd glance of the top of Lee and Jo's heads. Lee's lost his shirt by the end of second song Indispensible Pencil and Jo's follows shortly after. 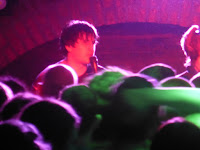 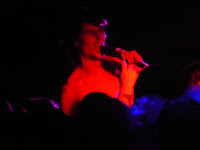 There's a real fire to the likes of Uber Capitalist Death Trade and Necroflat In The Palace ("this is a song about dead bodies, and shagging them") tonight, the vocals taking most of the weight given the fact that we can't hear much in the way of separation between the instruments, but with those rallying cries against the system centre stage it's revelatory as to why Cabbage have made such an impact already.

New single Gibraltar Ape is the penultimate song of the night and follows Cabbage's pattern of creating something that's unmistakably them, but without adhering to any set formula to their songs, meaning that there's a diversity and unpredictability to them that most bands simply don't have. The main set closer Fickle is probably their finest moment - "I'm the ficklest fucker in town, no fucker is more fickle arpund" is one of the best opening lines ever written in our view and as the song comes back in at the end and they let loose for one last time only the most joyless and soulless can stand still.

They're far from one-trick ponies though; there's a humour that runs through the likes of Dinner Lady and the way they dismiss a shout of Stockport by telling us they're from Mossley and they're far more ruthless, acute political sensibilities and views in It's Grim Up North Korea and there's even the addition of the almost romantic Because You're Worth It to the set, for which they invite up Bill Ryder-Jones to play guitar and tell us "to pay attention to the words, you hooligans". As they conclude with Kevin, dedicated to Lee's "c**t brother", and the front rows goes wild for one last bruising time, there's no doubt that Cabbage, against the odds, are going to be a very very big deal this year.