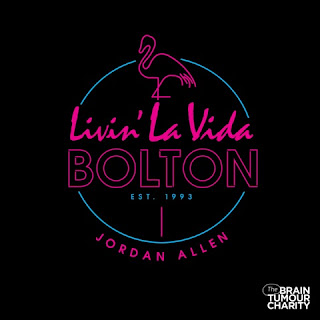 Living La Vida Bolton is Jordan Allen's first release of 2017 as he prepares for his assault on the concert halls of the land starting with a support slot with The Sherlocks this month. The three songs on the EP are the moment where a boy becomes a man and his band step up and make their mark. All proceeds from the EP will be donated to The Brain Tumour Charity in memory of Jordan's Dad, Kevin, and his biggest fan.

The lead track 110 Ways To Make Things Better opens with Kevin's answer phone message, a poignant tribute to his late father. The song itself is the strongest he's released yet, the product of a 2016 spent settling in new band members and writing and recording songs to take on the world and deliver on the promise that he showed with his early releases as an over-enthusiastic gangly teenager. The change is immeasurable, 110 Ways feels both ready made for mainstream radio, but without descending into the soundalike pattern that so many all male four pieces do to compromise and get noticed. At three minutes it doesn't hang around, its first bars and Jordan's howling intro set the scene for what's to come, the production is crisp and precise that allows everything from Nathan's drums and Jordan's forceful expressive vocals the room to breathe and be heard. Whilst the pace of the song is breakneck, it's not so at the cost of a tune and a message in the lyrics. It's a song you can imagine hearing blasting out on the radio and you knowing exactly who it is, which is no mean feat these.

Jordan's love of telling intelligent observational stories comes to the fore in Imperial Leather Drama, a tale of domestic upheaval that ends in "sweet revenge, anti-karma" and again the impact of his new band and their intuitive sounding combination makes it mark. The song is further demonstration of moving away from the hit-and-run impact of his early singles such as Remembered and Rich And Famous without losing any of the infectious energy.

Rosie has the same effect, a real rollercoaster of a song that builds up speed throughout without ever losing control yet thrilling the listener at every twist and turn including an uplifting section where Jordan and the band spell out her name in a moment that you can see hundreds joining in at the upcoming shows. Again it's based on observation, this time of a girl who dresses up like Amy Winehouse and who gets treated badly by the world and tells her story with a compassion and an understanding without that ever getting in the way of a tune that's sure to set pulses racing at shows.

The EP confirms the feeling that Jordan's now got an unstoppable momentum building behind him. In our humble view, he'll win over a whole raft of supporters in the next month with this EP and the live shows with The Sherlocks where we think he could upstage the headliners. It's a fitting tribute to his old man too, the start of something that will make him proud of his son as he looks down at every gig.