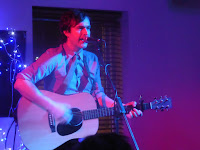 As he prepares for the release of his fourth solo album Look Up and summer shows with The Bluetones, we caught Mark Morriss on his never-ending solo tour of the UK with the first of two nights at the intimate Fred's Ale House in Levenshulme where he mixed solo tracks with The Bluetones classics and a few covers for good measure along with his usual fun and games joking with the audience. Support came from local youngster Andrew Knight.

Andrew Knight opens the show and the local lad's set is primarily covers, which feels like a shame as the two songs of his own that he plays - Take My Hand and Fairytale Of Love - both display a rich promise, a warmth and depth to the lyrics and an ability to craft a tune that goes with them. The audience response is also probably stronger to them than the covers he plays which hopefully won't go unnoticed. The covers he does play feel quite fitting in most respects for the evening - a couple of Seahorses tracks, a Chris Helme cover, Beady Eye and Shed Seven with a curveball of Rodrigo E Gabriela as his final song which shows a different side to his guitar playing. It's an impressive performance, but we would have loved to hear more of his own work. 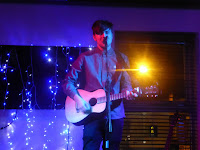 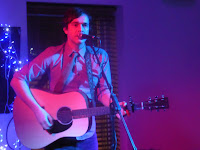 Mark's set is a real balanced mix of the songs that made his name with The Bluetones, but also the songs have continued his tradition of being one of the real underappreciated songwriters of his generations once the band folded first time round in 2011. Even though they've come back together there's little outward sign of them looking to write and release new material so the songs have found their way out into the world as part of Mark's parallel solo career.

The likes of Digging A Hole, It's Hard To Be Good All The Time, Space Cadet, Sail Way and This Is The Lie (And That's The Truth) still possess all that inimitable Morriss little charm and a lot of style that made people fall for his words twenty years ago. The crowd gathered into the lovely upstairs room that Fred's have turned into an impressive intimate performance space all get that, they know most of the words for these songs as well as the bigger hits that he splashes liberally around the set.

Those songs - Cut Some Rug, Bluetonic ("once called The Bluetones' new single by the NME") and Sleazy Bed Track are far less prevalent, rightfully given The Bluetones are touring again, than they used to be, but they still elicit wistful memories of two decades ago amongst the crowd and the inevitable singalong and they lose little in the translation to the solo acoustic format.

He's on great form too, his shows are noted for his warm sense of humour and ability to make the crowd laugh as well as fall for his music. He encourages us to go and buy him double Jack Daniels and Coke because they're cheaper than singles and tells us he's only come back this year because the gig last year was so bad and he got away with it (which those that were there tell him wasn't the case). He stops in the middle of A New Athens when someone drops a pint glass, completely thrown and then plays part of Elton John's Bennie And The Jets, after already having played his cover of Goodbye Yellow Brick Road from his A Taste Of covers album. There's also some light-hearted football banter though with Mark being a Liverpool fan he's on dodgy ground in Manchester. 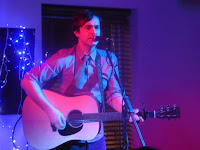 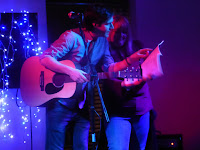 The piece de resistance though is If, a song he very rarely if ever plays live solo. He forgets the start of the second verse, possibly after a few too many of those JDs, but everyone joins in with him and he's helped by one lady who strangely has the Return To The Last Chance Saloon sheet music with her and hops on stage to hold it up for him.

There's something special about evenings like this where you can see the whites in the eyes of the musician, where they let down that guard that the big stages they usually play on allows them and they can become human and strive for something more than just entertainment and playing their big songs. Mark is one of the most engaging charming front men on the circuit these days and he's still writing great songs as the one song from Look Up he plays at the end attests to.