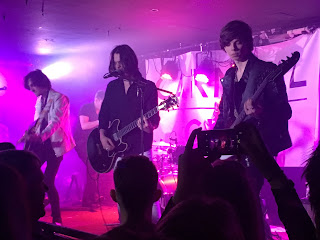 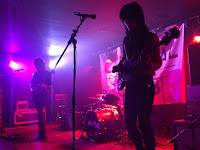 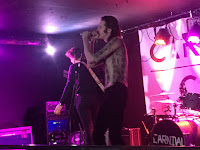 This Ruby Lounge show was Carnival Club's first ever headline show, but from the response they got from a packed crowd and the confident assured performance they gave that had a moshpit going wild from the very start, you wouldn't have been able to tell. As early as February they've already justified their spot in our Tips For 2017 and we suspect the rest of the year will get bigger and better. Support came from Crimsons and Kieran Dobson.

It's Kieran that opens up proceedings and it's an intriguing set he plays. Just as one of my friends turns to me and says he reminds him of Nick Cave, he plays a Nick Cave cover (Red Right Hand) and does a great job of it too. However, it's the rest of the set that impresses us, he's the type of front man that you can't take your eyes off for fear of what you might miss and he's got a strong deep voice that allows him to emphasize words to maximise their impact.  And he has the songs and the band to go with it too, recent single My London Dream, future single Psyche Out and his final song Euthanasia being the stand out tracks. Songs are full of dramatic intent that matches the performance and whilst he takes centre stage, his band are impressive too creating the backdrop against which his moves would otherwise look very strange indeed. 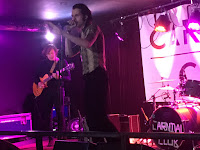 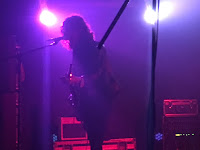 Crimsons are a band we've seen a few times recently as they've popped up on a number of bills and every time we see them they seem have taken things up a notch. Painfully cool, they don't say much to us and the lighting deliberately makes it difficult to see the whites of their eyes, but let their music do the talking. They make creating long languid rich in texture songs that feel like they're born out of late night jams seem effortless and powerful. It's music to immerse and lose yourself in as most of the first few rows do throughout as the grooves kick through the powerful Ruby Lounge sound set up. Their cover of I Just Want To Make Love To You oozes sexual tension, but it's their own material, particularly Night's Darkest Side when they slow things down and a new tune they play that really stands out and makes them feel like a band on a mission. 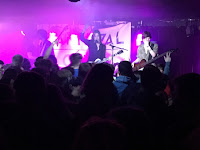 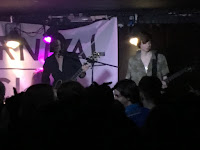 Carnival Club definitely are on a mission. Buoyed by one of the most impressive turnouts we've seen for an unsigned band playing its first headline show, the atmosphere is electric by the time they come on and they create a connection between themselves and the audience that ensures everyone joins in the celebration of what's inevitably to come for them. What they do so brilliantly is to fuse an impressive knowledge of some of the finest guitar bands ever to strut the earth and their own ideas into something that has an immediacy to it, both to the old timers like us and the kids down the front who are throwing themselves around. The last time we saw a band do this was Blossoms and we know where they've ended up.

Already they've got a set of songs that can form a forty five minute set with no filler at all. There's the four tracks from their forthcoming EP - House Of Cards, Mistakes Troubles And Kisses, You're So Hostile and its title track Magdalena's Cape which we've been fortunate enough to hear - but there's plenty more that leaves a similar impact, whether it be one of their earlier songs Moulin Rouge or a new one Stubbornness Girl that takes them to a new level and has single written all over it. They make no apologies for the sonic ambition and widescreen approach and you can already hear some of these songs filling huge halls in the not too distant future. They're a pleasure to watch as well in the way you can see the bond between them, they way they interact and their slightly nonplussed beaming reaction to the chaos that's unfolding in front of them.

The response at the end tells us everything we need to know and what we already knew. Carnival Club are going to be absolutely huge.