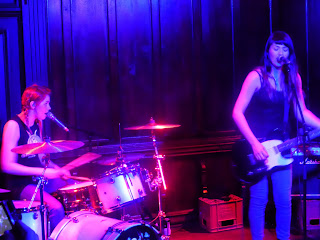 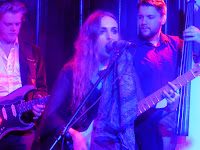 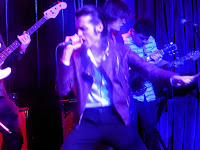 Rews' debut headline tour hit The Castle in Manchester on Thursday night accompanied by Maddy Storm and Kieran Dobson. The highly-tipped duo more than justified the growing excitement around them in a thrilling forty-five minutes whilst both support acts won over new fans with great sets.

Kieran Dobson opens up proceedings in his own inimitable style. Not fazed by a guitarist who's lost a string who manfully carries on until the end, his set full of dramatic hip-shaking posturing and art school moves is a real delight to watch. When he's not rolling around on the floor or considering risking the wrath of the headliners by standing on their drum kit, he's delivering seriously uplifting and soaring songs such as his forthcoming single Psyche Out, the majestic My Life Story echoing previous one My London Dream and the set-closing Euthanasia. He throws in a cover of Nick Cave's Red Right Hand too and we ponder how refreshing it is to see someone so clearly influenced by such a great rather than aiming much lower. 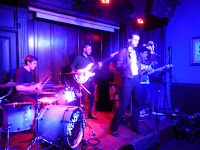 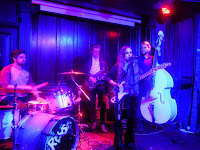 Maddy Storm is just nineteen, but a star in the making. There's a sizable crowd gathered for her, mostly on word of mouth, and she delivers a set of swirling psychedelic songs that belie her tender years. Full of dramatic intent, moments where the music swoops then soars with a voice that possesses a range that can skip from warm and seductive to soaring other-worldly without missing a beat. The songs are there too - Tempest is ambitious in scale and never falls short whilst Water is slower, more brooding with a hint of menace which shows off yet another facet to Maddy's voice. Midnight  and Northern are bursting at the seams with ideas that feel reigned in by the intimacy of the venue she's performing in.  A cover of The Clash's Rock The Casbah might seem a unwise choice, but it's delivered with an individual take on it that manages to stay true to the original but shine new light onto it.  They finish with new single To The Sun which is out next month, a driving kick drum beat setting the pulsating undercurrent of the song allowing Maddy centre stage to let loose for one last time. We're seriously impressed.

Rews are something else though, one of the most awesome live sets we've had the pleasure of witnessing in many years. For just two of them, Shauna on guitars and keyboards and Colette on drums, they make an almighty sound that one minute threatens to rip your head off and stick it back on the other way round and the next delivering shards of delicious melody that come out of nowhere to disarm and charm you. Their non-stop energy is infectious and exciting, like they're daring you to have as much fun as they're clearly having. Their twelve song set never dips from the moment they hit us square between the eyes with a trio of singles to start off proceedings - Let It Roll, Can You Feel It and Shake Shake - which are a clear sign of intent. The latter is a raucous brilliant ball of energy that simply explodes at the chorus and leaves you humming it for days afterwards. 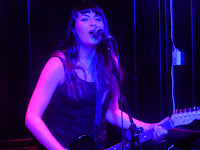 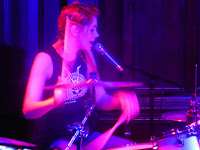 That they can dispense with those three first and the set never drop is testament to the bank of songs they possess and despite the limited resources that being a two-piece gives them, it never once feels like they're repeating themselves. Shauna takes to the keyboards for a couple of songs mid-set, but that allows Colette to demonstrate how she takes the place of at least three members of any other band in creating a sound that wouldn't be out of place in the much bigger places than this that Rews are inevitably heading towards. Muse, Rip Up and their encore Shine are the real stand out tracks from the rest of the set which includes their most recent single Miss You In The Dark and by the end the audience which had been static at the beginning have simply been won over by sheer force of nature. There's a power, precision and a love of what they're doing that make it impossible not to love Rews.

Maddy Storm is on Facebook and Twitter. She plays Manchester on March 12 at Aatma as part of the Astral Elevator night and supports Bryde at The Castle on April 24.